We, the unwashed, bleary eyed writers of blogs and reviews who are often found semi-slumped over our keyboards trying to find a new word for the sound of drums, often use the term "huge" when we are describing music, but what does that word really mean when applied to a groove, a riff or a sound?  At Desert Psychlist we tend to use "huge" not as a description of a certain piece of music's volume or the duration of it's length but more in the context of its intensity and depth in which case Dead Sacraments "Celestial Throne" is not just "huge" it's absolutely humongous! 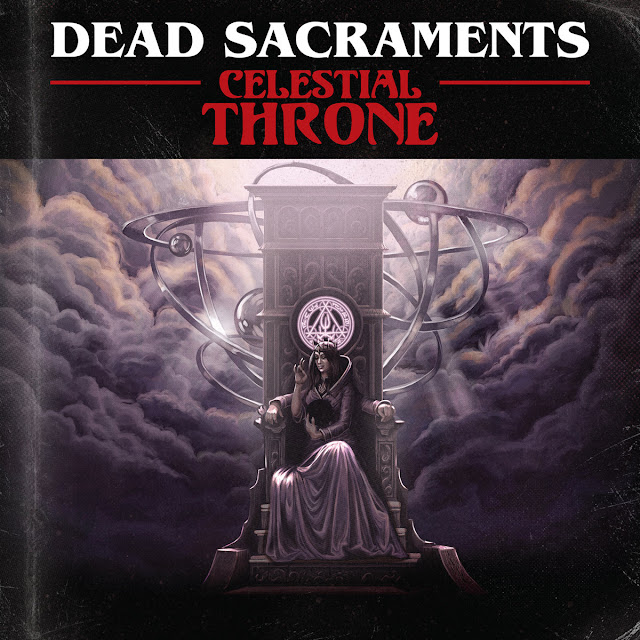 Dead Sacraments preface their grooves with the legend "Riffs + Dungeon Crawling", Desert Psychlist is not 100% sure what the "dungeon crawling" part actually alludes to but we are more than certain where they are coming from with the "riffs" part of that statement. "Celestial Throne" is an album with riffs to spare, the band utilising thick low slung guitar refrains, twinned with deep reverberating growling bass lines pushed by powerful thundering percussion to create a sound that is intense, dank and somewhat claustrophobic (that "dungeon crawling" is starting to make sense now). Not content with creating grooves that have a cloying, subterranean atmospheric the band then ramp up the denseness of their grooves by coating those same grooves with clean monotonic vocal harmonies that have an almost monastic/Gregorian feel and  tell of "bloodstained rites in profaned glades" ("Void Summoning") and "labs and dungeons: flooded, drowned in the blood of our dead " ("Cracking The Celestial Throne"). Lyrically and musically "Celestial Throne" is no stroll beneath sun streaked blue skies yet having said that there are times when the light penetrates through the gloom and pierces the dismal darkness with rare glimpses of sunshine, these glimpses of brightness present themselves in the albums soaring guitar solo's that swoop and swirl above the morose and monolithic refrains beneath them and in doing so take things to an altogether higher plane of aural enjoyment.

Dense, dark and utterly intense "Celestial Throne" is not an album that's going to lift your spirits and put you in the mood for dancing, it is however an album of songs that sonically mirrors that conflict of light and shade that lies somewhere deep inside each and every one of us.
Check it out. …..