Desert Psychlist has seen a lot of vlogs, videos and social media posts lately, from some of the leading lights in the underground industry, telling aspiring bands how to best promote their wares to potential labels and publications but not many have mentioned artwork. If an artist/band wants to really get their grooves noticed, among the many albums and EP's that are constantly being released, then artwork is an essential tool in promoting those grooves. Now there are usually two ways to go about how to use artwork, you can go the aesthetic route whereby you choose something stunning and beautiful to the eye or you can choose to go the shock route and use something that will grab a browsers attention due to its controversial nature. There are of course degrees to be found in both approaches, you don't want to alienate your potential fanbase by using something so sickly twee that it makes them want to vomit neither do you want to portray something so gross that it freaks them out or causes offence, a balance needs to be found. London trio The Red Widows have achieved that balance with the artwork for their latest release "Fuzzifixion" (Cover artwork by David Johnson from Obscure Media), a slightly overexposed photo of a female model (Valerie Wierzbicki), dressed in blood soaked white robes, posing in a Christ like stance, a photo that catches the eye due to its ambiguous religious iconography but also, when combined with the albums title, gives the casual browser a fair idea of what to expect beneath the imagery, and what is beneath that imagery makes all the work put into that cover totally justified. 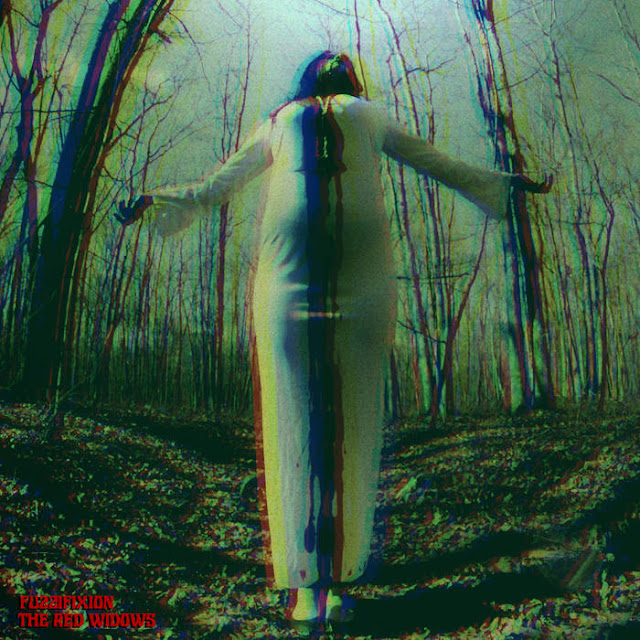 Alex Corvino (vocals/bass), Rev. MojoFuzz (guitars/backing vocals) are The Red Widows a London based collective who first came to Desert Psychlist's attention with their debut EP "Rising" a stunning three song EP that highlighted a band with one foot in the proto-metal camp and the other sinking into the dark mire of doom. Since the release of their debut EP The Red Widows have parted ways with their original drummer, the mysteriously named John Doe, and so for "Fuzzifixion" recruited sound engineer Marco Alejandro Papiz in for drumming duties. Whether due to the change in line up or because of some other unknown factor "Fuzzifixion" marks a huge evolution in both The Red Widows overall sound and direction. The first thing that comes to the listeners notice, as first track "Pendulum" assails the ear canals, is the different approach Corvino uses in her vocals, where the bassist/vocalist utilised an almost classic rock tone on "Rising" here we find her employing an almost monastic vocal style, still as powerful and dynamic as on the bands previous work but this time around there is a spiritual/religious feel to to her tones, especially when harmonised with the Rev.Mojofuzz's backing vocals. The good Reverend also has made some significant changes to his sound, his guitar tones on "Fuzzifixion" sound thicker, darker and more distorted especially on the excellent brooding "Lucifer's Maiden" where his guitar combines with Corvino's growling deep bass to create a sound that is more a rumble than a riff. Papiz may only be filling in a vacant seat at the moment but if Corvino and the Rev. have any sense they should sign him up as a full time member pretty sharpish as his contribution to "Fuzzifixion" is immense, solid tight and economical he drives each song with a powerhouse display of percussion that at times defies belief . "There Is No God", "Cursed Forever" and "His Name Is Death" proceed the two songs already mentioned and follow much the same blueprint, dark, dank low slung riffage and hazy dark guitar solos driven by pummelling percussion all decorated with those superbly executed vocal tones, a tsunami of dank heaviness and dark spiritual groove that come at you wave after glorious wave. 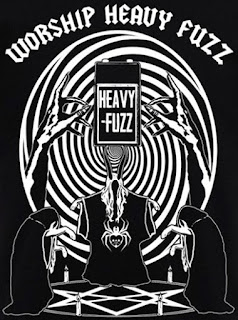 The Red Widows have with "Fuzzifixion" dropped the proto aspects of their "Rising" EP and embraced their doom side full on. Imagine if you can the sound of a High Priestess of some ancient religious order chanting majestically above the sound of two tectonic plates grinding against each other deep beneath the Earth's surface and you might, just might get a handle on what the Red Widows are all about.
Check 'em out …..

* Vinyl soon to be available on  DHU Records
Posted by Desert Psychlist at 08:11