Along with all the usual instrumentation London trio Old Horn Tooth also mention that each member brings something a little extra to the party, guitarist/vocalist Chris Jones along with supplying crunching low slung riffage, screaming solo's and strong clean vocal tones also dabbles in a little "hypnosis", bassist Ollie Issac, not content with laying down deep, heavily distorted low end, also brings "vibration" and "filth" to the table while drummer Mark Davidson adds "attitude" to his pummelling array of percussive skills while at the same time apparently carrying his troubles around with him in something called a "greifcase".
Confused? Well things may become a little clearer when you delve into the bands debut release "From The Ghost Grey Depths". 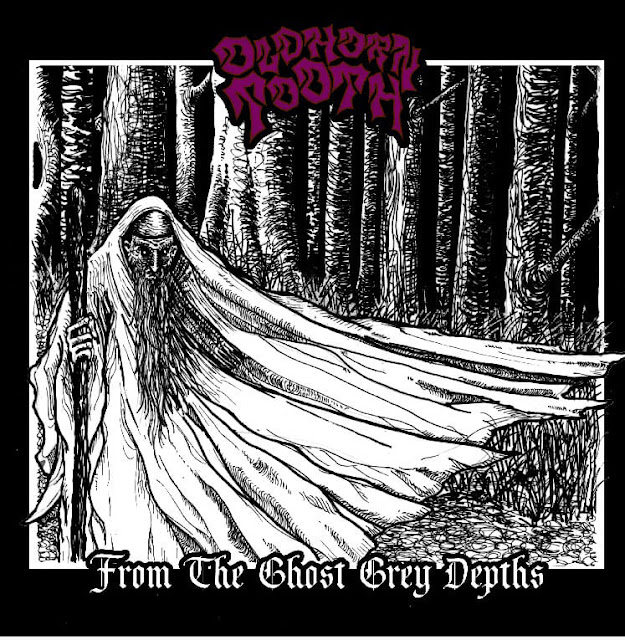 As first track "She Is Risen" washes in on a wave of white noise and droning effects, interrupted only by a thundering bass drum beat, you begin to get an inkling of where that "hypnosis" element of the bands sound is derived from, by the time the thrumming low bass and heavily distorted guitar kick in and we are treated to the songs incessant wall of deep, dank riffage pushed by a mix of restrained and thunderous percussion  that inkling has become a certainty. Jones adds to the songs slumberous and mesmeric quality with a vocal that is powerful and clean and has just the right amount of highs and lows in its dynamic to stop it slipping into the realms of monotonic. "Follow the Demon" brings the "filth" and "vibration" elements to the table courtesy of Issac's low, bone crumbling bass which, when combined with Jones' mix of  crushing dark powerchords and Davidson's pummelling and thunderous percussion, creates a groove that could persuade even the most timid amongst us to join the aforementioned demon's parade. "Old Horn Tooth" follows ,a song that the band share their name with and the one that best demonstrates their Anglo-Saxon take on stonerized doom. Huge relentless and dank the song begins with a monolithic bass and guitar refrain, enhanced by monotonic vocal tones and is driven into the ground by immense display of piledriving percussion, the band sitting on this groove for most of the songs duration until, when in the songs final third, they shift into proto-doomic mode to take things to a close. You have not mentioned the "greifcase" we hear you cry, well that comes in the shape of what can only be described as an experiment in mood and sound, an appropriately entitled piece called "Greif" that is a weirdly compelling smorgasbord of drones, sound effects and random percussion. "Greif" it is not exactly what you might be expecting to close an EP that up until now has been a full on doomic assault on the senses but it does have a strange charm and goes to show that there is more to this band than which first hits the ear. 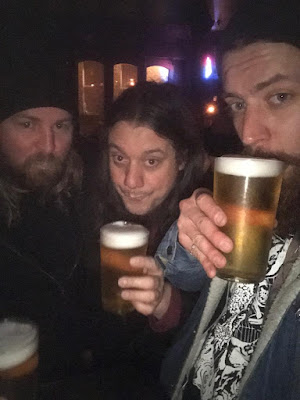 For a long while Britain was lagging behind the USA and the rest of Europe in the underground rock music stakes but over the last four or five years Desert Psychlist has noticed more and more bands hitting a groove of a more stonerized doomic nature, let's hope that trend continues and we see more bands of Old Horn Tooth's quality emerging in the near future
Check 'em out ….