In doomic circles it is generally accepted that when it comes to capturing, in music, the vibe of those old horror B movies and tv shows like "The Twilight Zone" we all grew up watching then it is the Italians who are the masters. One band who might disagree with that statement however is Portland, Oregon's Space God Ritual, three crazy dudes who have built their career around transposing Lovecraftian themes into heavy musical soundtracks. The band, The Owl, Yohan Sebastian Glamour and Alexander Olaff (we did say crazy dudes), return this year with more tales of space and magic, horror and terror with a new opus entitled "The Unknown Wants You Dead" 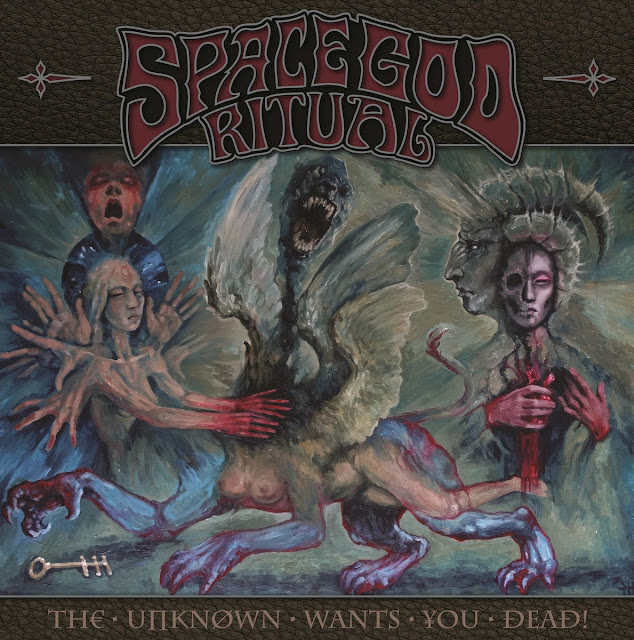 We spoke earlier of horror movies and TV shows and Space God Ritual's latest opus begins with "Miskatonic 1927" an introduction piece that the legendary master of ceremonies Rod Serling, who used to present the excellent late night horror show "The Night Gallery" would have been proud of, an introduction that invites us, in convincing clipped British tones, "to take an Eldritch ride through horrors dark and obscene" against a backdrop of heavily orchestrated eeriness. Introductions over we then move straight into title track "The Unknown Wants You Dead" and here we find Space God Ritual hitting their stride with a song that although jamming a groove that is proto-doomic in nature possesses an almost vaudeville/British music hall feel with its villainous laughter, whispered undertones and operatic harmonies a theme that runs right through all eleven of the albums songs. Whether Space God Ritual approached this album with the intention of creating a doom version of a Victorian penny dreadful (cheap popular serial literature produced during the nineteenth century) is unknown but that is exactly what they have created with this album, eleven songs, stories, vignettes that almost impel the listener to boo and hiss as each character makes their appearance, you can almost see moustaches being villainously twirled and capes being furled and unfurled as the band tell their lurid tales of the macabre beneath swathes of cleverly arranged heavy traditional and proto-ic doom. 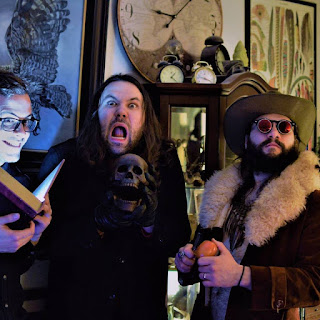 Desert Psychlist does not expect everyone to buy into what Space God Ritual are striving to achieve with "The Unknown Wants You Dead", there is a Britishness to what these Americans are doing here that might not sit comfortably with those not familiar with the history of Victorian music hall, but for those of you who do get Space God Ritual's take on vaudevillian story telling you are in for a rare and quite unique treat.