THE NECROMANCERS ~ OF BLOOD AND WINE ....review

The Necromancers, Tom Cornière (Vocals, Guitar), Robin Genais (Lead Guitar), Simon Evariste (Bass Guitar) and Benjamin Rousseau (Drums), loomed out of the ether last year and blew everyone's minds with their debut release "Servants of the Salem Girl" last year, the band and album garnering high praise from all the right quarters as well as just narrowly missing the number one spot in our own "Desert Psychlist's Best of 2017" end of year list. The band return this year with a new album, "Of Blood and Wine"(Ripple Music), hoping to not only to repeat the success of last year's album but to maybe surpass it. 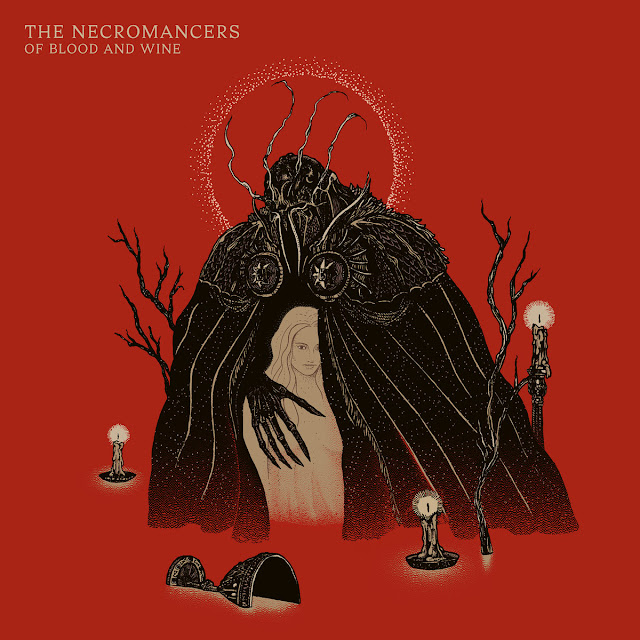 The trouble with having a critically acclaimed debut album is that your next album is going to be put under the microscope and heavily scrutinised by all and sundry looking for weaknesses and failings, was the first album a lucky fluke, will the new material match the high expectations of both the critics and the fans? The answer to those questions is a resounding yes and no, yes they can match those expectations and no the first album was NOT a fluke, the question of whether "Of Blood and Wine" surpasses "Servants of the Salem Girl" however is a difficult one as its a little too early to compare one over the other and only living with an album for a period of time can really decide that question. On first impressions , and at this present time, Desert Psychlist can say that "Of Blood and Wine" is most definitely , if nothing else, on an even par with its predecessor, those post-rock textures and psychedelic/prog undercurrents that made "Servants of the Salem Girl" such a joyous and satisfying  listen are all in still in place and as with their previous release their is a genuine high level of songcraft to be found amid all the growling riffs and incessant rhythms. If there is one thing that sets the new album apart from the old one it is in  the amount of "swing" present on "Of Blood and Wine",  the band, maybe buoyed by the success of their previous outing, seem to have loosened up their sound and found a greater freedom to express themselves, a freedom that although evident on "Servants of the Salem Girl" here is taken to a whole newer level. This looseness and freedom is never better exemplified than on the albums standout track "Erzebeth" a sprawling twelve minute plus opus with a thundering groove that gallops and gambols along on an addictive chugging riff interspersed with Celtic tinted guitar decorated by a mixture of warm crooned and grittily roared vocals, the song taking off into a mind blowing instrumental mid-section before returning to its original groove and coming to its close. The band are not afraid to tread more tranquil waters either as the brief but atmospheric title track " Of Blood and Wine" testifies to, however it is those tracks of a more sludge tinted, prog orientated nature that really win the day here and will ensure listeners coming back to this fine album again and again not only now but also years into the future. 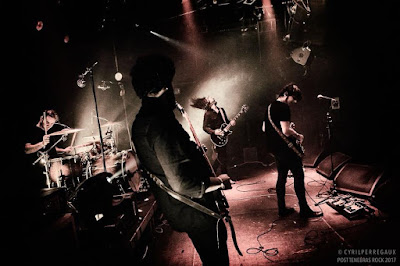 The Necromancers may have suddenly appeared on our radars seemingly out of nowhere but if they keep writing songs as good as those found on "Of Blood and Wine" then these guys are going to be with us for a long time to come.
Check it out …..
© 2018 Frazer Jones
Posted by Desert Psychlist at 09:54