What was once one is now four, Burn Ritual began life as a one man project of vocalist, guitarist and keyboard operative Jake Lewis and it was as a one man project that Burn Ritual's debut EP " Like Suffering" was recorded and released. Such was the reception to "Like Suffering" that Lewis soon realised if he wanted to see his music breathe outside of a recording studio he better get himself a band together and so in came Brent Standifer (drums), Richard Perez (guitars) and Chris Trezona (bass), the one had become four. The quartet soon started working on new songs Lewis had written and it wasn't long before they had enough material to fill an album, that album is now out in the world and flying under the banner of "Blood of the Raven" (Cursed Monk Records) 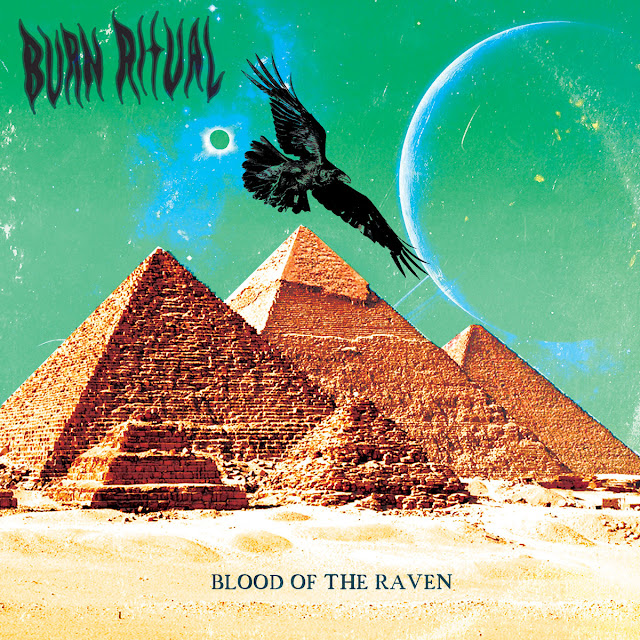 A jet black raven, depicted against an alien skyscape, riding thermal updrafts over the Great Pyramids graces the cover of "Blood of the Raven" and is a good indication of the sounds contained within. The album's Sabbathesque desert tinted stoner/hard rock grooves, over which spiritual themes are lyrically explored in mantra like tones, is not exactly new but damn it's effective.. Burn Ritual jam a groove not unlike that of cult Welsh weed worshipers Dope Smoker except for the fact that Burn Ritual are lyrically more wordy and a little less repetitive preferring to pepper their songs with a touch more dynamics and musicality. All of "Blood of the Raven's" seven songs are a masterclass in how to make a lot of very little, the band deviate very little from the main riff of songs like "The Mirror", "Repent" and "Cast Away" but its the way they lift and lower each songs dynamic by throwing in little fills,licks and vocal inflections that maintains the listeners interest and ensures everything sounds fresh and focused. Only once do they step off the groove path and that is with "The Creature Inside of You" a trippy "Planet Caravan" type outing with heavily phased vocals sang over reverberating keyboards and subtle hand percussion. 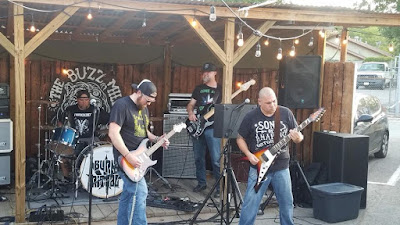 Burn Ritual's ability to create mesmerising, hypnotic songs that worm their way into the deepest recesses of your psyche is one that works to great effect throughout "Blood of the Raven", the band jamming trippy, trance like heavy psychedelic dirges that capture, captivate and enchant in equal measure
Check it out …..