ALASTOR ~ SLAVE TO THE GRAVE ....review

When Desert Psychlist reviewed Swedish doomanauts Alastor's debut EP "Black Magic" we described the band as "cherry pickers" a band "taking what they can use" from various sources and "discarding what they can't". Although their are still elements of this "cherry picking" to be found on the bands latest release, "Slave To The Grave"(RidingEasy Records) there is strong sense of a band striving to find their own groove and create their very own signature sound. 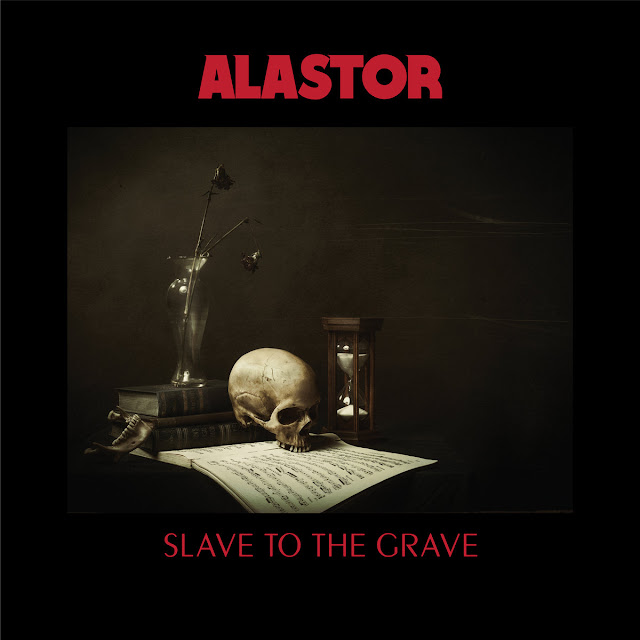 "Slave To The Grave" starts life with "I döden är vi alla lika" (English Translation: In Death We Are all Equal) a short introduction piece with a strangely stilted narrative, spoken in Swedish, over a background of tolling bells and rolling thunder that cleverly segues into "Your Lives Are Worthless". The roiling thunder of the intro here is replaced by equally thunderous percussion overlaid with deep growling bass and a low slung grinding guitar riff around which the vocals are sang. It is in the vocal department that Alastor play their ace card and deviate from the usual doomic path of guttural growling and demonic screeching, the band instead pitching their vocals at the cleaner more melodic end of the spectrum. "Drawn To The Abyss" follows and boasts a wonderfully addictive vocal melody offset with hugely effective backing harmonies over a strident but no less grinding groove that finishes in a scorching bluesy jam with searing guitar solos facing off with swirling, textured keyboards. Next up is "N.W. 588" a song that in the pre-digital days would have had "single" written large all over it, its WAH drenched guitar motifs and driving groove resonating in the mind long after the song has reached its gloriously psychedelic conclusion. "Gone" allows the listener to catch his breath with a gently strummed acoustic number that incorporates crooned vocal harmonies and, believe it or not, whistling. Things return to some semblance of doomic normality with title track "Slave To The Grave" its shifting time signatures and searing guitar solos only just kept in check by a monstrous bass and drum groove. "Spider Of My Love" closes proceedings, its slightly hazy, reverberating vocals are underpinned by deep dark keyboard textures and wall shaking rhythms and is taken to another level by eventually exploding into a doomic heavy psych groove with screaming, swirling lysergic laced guitar gradually making way for the same rolling thunder that introduced the albums opening track. 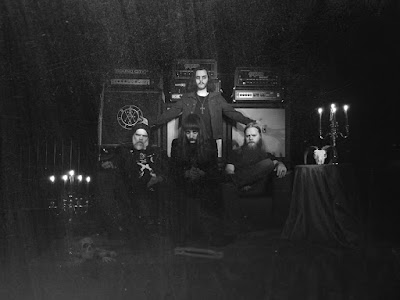 "Slave To The Grave" sees Alastor evolving as a band, finding their place in the world and laying down a marker that says this is us, this is what we do and this our sound. A mighty fine sound it is too!
Check it out …