Back in the late 70's there was a division building up between those that loved their rock bluesy and hard and those that leant towards a more radio friendly commerciality in their grooves. but although battle lines were starting to be drawn up and barricades were slowly being erected one band seemed to galvanise opinion, that band was Bad Company, a group of musicians who successfully bridged the gap between the bluesy bluster of Led Zeppelin and Free and the more easy on the ear AOR meanderings of Journey and Foreigner  . So why ,when writing a piece on a fairly recent band, should we be mentioning one of the UK's finest exponents of mid paced radio acceptable rock?
Well the answer is Portland, OR's Ape Machine are very much a band from that old school of rock where the strength of your songs,melodies and arrangements are just as vitally important as the riffs and rhythms you use to decorate them, something that becomes glaringly obvious when listening to the bands fifth studio album "Darker Seas" (Ripple Music) 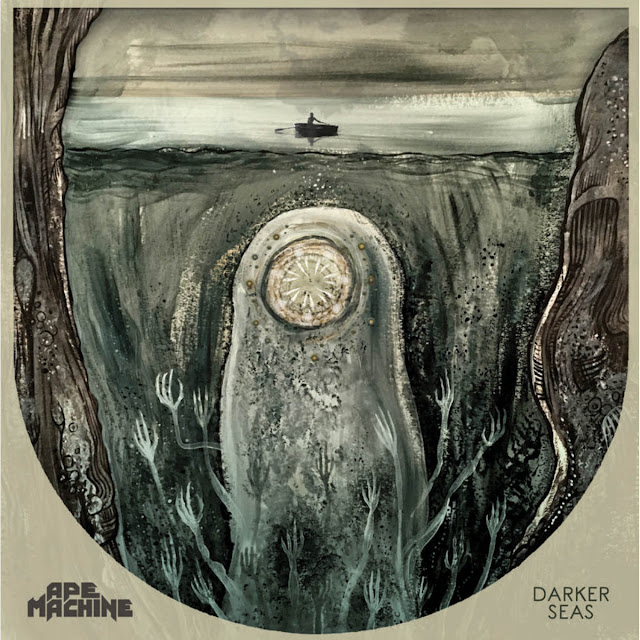 "Damned, Their Bones" opens "Darker Seas" account with oodles of bluesy swagger and classic rock bluster, vocalist Caleb Heinze telling us, in tones that sit somewhere between those of Free/Bad Co's Paul Rodgers and that of late Wild Turkey/Rick Wakeman Band frontman Gary Pickford-Hopkins, a cinematic tale of flight and fury over a backdrop of prog tinted swirling guitar (Ian Watts), booming liquid bass (Brian True) and solid punchy percussion (Steve Hanford). Ape Machine, however, are not content to just play the classic/hard rock card and bring into play elements of progressive texturing throughout "Darker Seas", fleshing out their grooves with these elements yet managing to do so without falling into the trap of technical overkill and overcomplication, creating more of a subtle prog colouring than a full blown technical wash. What makes "Darker Seas" really work though is that no song is overworked or overly long the band keeping songs like "Into The Shredder", "The Contract" and the excellent "Bend The Knee" all under the five minute mark with only "Watch What You Say" just creeping over by a second. This brevity of song length works twofold in that the listeners mind remains focused on each song without boredom or distraction getting in the way and that the band themselves are forced into to making their songs more immediate and impactful, something they do to startling effect throughout "Darker Seas" eleven tracks. 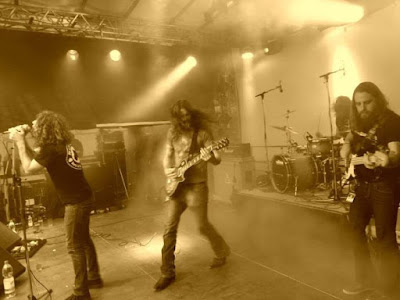 Why, you might be asking, are Desert Psychlist reviewing an album from a band whose music leans towards the more mainstream end rock when we could be telling you about the crushing riffs of say the new YOB or Conan opus? The reason dear readers is that good music is good music whether it is dressed in satin and tat or in cargo shorts and sweaty tee's and "Darker Seas" is damn good music!
Check it out …