Let's start this review with a word from the band whose EP is its subject ...
"The Black Swamp have re-hashed a sludge sound reminiscent of 70's and 90's before heavy metal got all dicky about the genre divide". A bold statement but what does it actually mean? Well  give the bands new EP "Witches" a spin and all will be revealed A brief screech of howling feedback and a feral scream introduces first song "Headless" and we are immediately plummeted into The Black Swamp's world of crunching heavy guitar riffage and powerful pulverising rhythms, a world where old school hard rock and southern swagger live harmoniously together with swampy sludge brutality and new age metal aggression, these diverse elements mingling together to create a tsunami of mind-blowingly powerful groove. A tsunami is always driven by a force and the "force" that drives The Black Swamp's wave comes from the relentless pummelling drums of Brendan Woodley and the grizzled growling bass of Rohan Downs the pair combining to lay down a bedrock of gnarly thunderous rhythm for the rest of the band to decorate with their own contributions. Those contributions come in the shape of the grainy fuzz drenched distorted riffs, crunching powerchords and swirling solo's provided by guitarists Grant Scott and Jesse Kenny and the bear-like vocal growls of Luke Hosking, Scott and Kenny trading off licks and refrains around Hosking's strong throaty roars framing the frontman's big beefy tones with an array of dank gnarly riffage. "Witches" is not just a vehicle for a series of blustering riffs and rhythms however, songs like the aforementioned "Headless", the superbly atmospheric "Event Horizon" and title track "Witches" also bring an element of swing and melody to the table giving the somgs an added level of gravitas and intensity as well as enhancing their overall sonic impact. 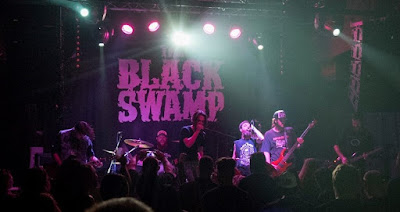 The Black Swamp's prospects were already looking pretty good with the releases of their first EP "Foulness" and the  excellent 2016 debut full length "I Am" but with "Witches" the band have refined their sound, raised the bar and stepped up to the next level, it's just a shame it wasn't a full album,
Check it out ....