Swansea three piece Estuary Blacks, Dan Williams (bass), Alex Bodinger (guitars/vocals) and Tom Young (drums), describe their sonic output as "post marsh rock" a unique blend of post and progressive rock  mixed with elements of heavy stoner metal, a blend that permeates every pore of the bands debut album "Estuary Blacks".(releasing digitally 17 February 2018 and a yet to be announced vinyl release later in the year on Kozmik Artifactz Records) 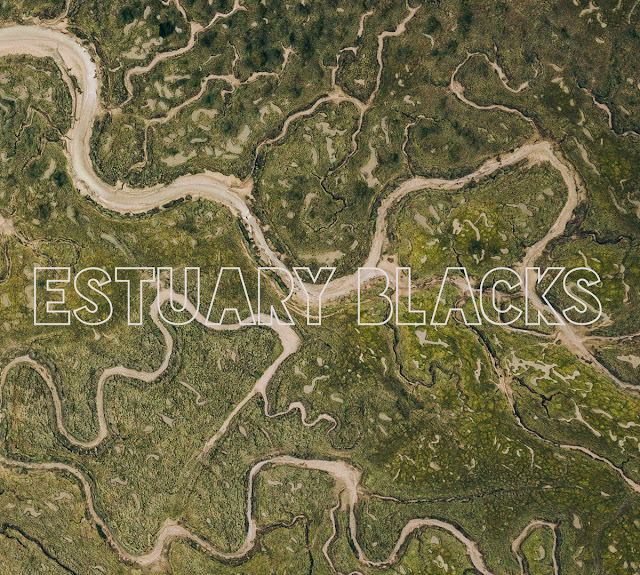 If Desert Psychlist was forced to compare what Estuary Blacks bring to the table with another band then it would have to be Boston soundscapers Elder, both bands deal in huge multi-layered grooves, both have a tendency for long instrumental passages and both lean towards the progressive end of the stoner spectrum. Where Estuary Blacks differ from their American counterparts however is in the fact that the Swansea trio's progressive leanings, in places, drift towards the much more traditional end of progressive rock. This becomes immediately evident on the albums opening track "Moorings" a delightfully complex instrumental underpinned by lush liquid bass lines and intricate rhythms overlaid with a mixture of clean classical tinted arpeggios and post-rock textured guitar solos. Next track "Trawlers" follows where "Moorings" departed opening with folk flavoured clean guitar motifs played over a chiming backdrop of laid back groove that then suddenly explode into a gloriously crushing doomic refrain around which superbly pitched mellow clean vocal melodies are delivered. "Fat Jason" follows and raises the bar high with a song that oozes atmosphere and intensity, the songs epic, anthemic feel is enhanced by Bodinger's stunningly powerful vocals and  swirling guitar textures and  is compounded by Williams and Young's complex and elaborate rhythms. "Hank Carmarvin" allows the listener to take a breather and wallow in a sea of acoustic bliss before being dragged back into the real word by "Caswell Brat" an undulating instrumental groove fest that ambles through tranquil post-rock territory before slowly building to a heavy blues tinted, prog flavoured crescendo. "Puris Prass" closes proceedings by tying all the various threads and elements visited elsewhere on "Estuary Blacks" together in one song, prog-like complexity, post-rock intensity and stoner-like fuzz all weaved together in a tapestry of moving, atmospheric and at times breathtaking intelligent groove. 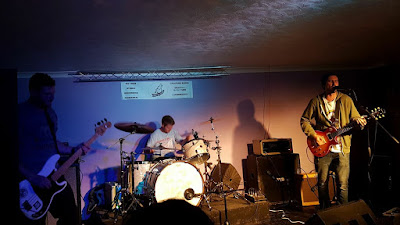 If while reading this review you felt a little put off by the references to "post-rock" and "progressive" then take a few seconds of your time and just click the "play" icon on the link for "Estuary Blacks" below and you might just find a piece of music that will allay your fears and open your ears to a whole new world of music
Check it out ....