Boston trio Sundrifter, Craig Peura (vocals/guitar), Patrick Queenan (drums) and Paul Gaughran (bass), make no bones about their almost obsessive interests in space, time and the existence of extra-terrestrial life, the band utilising these interests as the foundations on which to build their songs and theme their albums. The band first whetted our appetites for grooves astrophysical with their 2016 debut "Not Coming Back" a stunning opus packed to brimming over with spacey desert goodness that had more than a trace of Kyuss/QOTSA-like sandy swagger ingrained within its grooves, this year the band return to take us once again to the edges of our consciousness with their new release "Visitations". 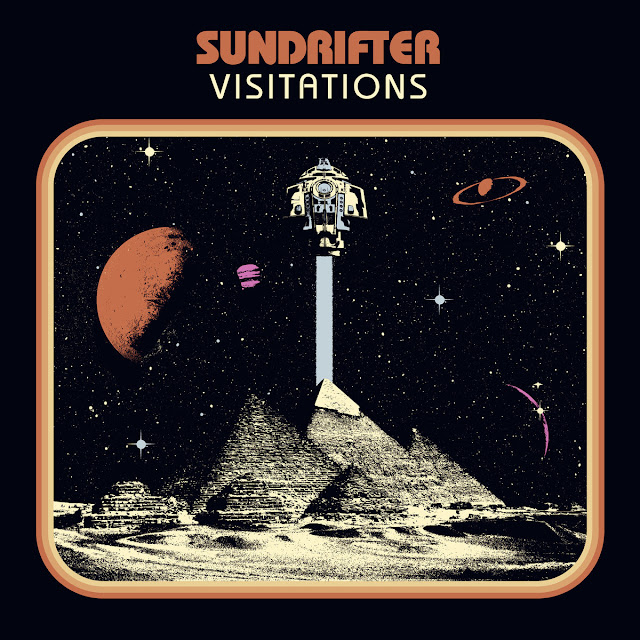 "Vistations" kicks off with an absolute peach of a track in "Sons of Belial" its deeply fuzzed circular refrain, pushed by growling bass and crashing drums and coated in cool clean vocals, comes out of the traps like a greyhound in pursuit of a hare and grabs the listener by the throat and refuses to let go until the last note fades into silence. This is then followed up in quick succession by two similarly paced but dynamically different songs in "Death March" and "Lightworker", the former a quirky heavily distorted desert opus with eastern undertones, the latter a Kyuss shaped rocket flying at speed over a bedrock of insistent grainy groove, all three songs taken to another level by Peura's astonishingly clean and effective vocals. The guitarist/vocalists powerful distinctive tones, a strange hybrid of Scott Walker's (The Walker Brothers) torch-song crooning and Chris Cornell's impassioned feral howling, are startling and astonishing all at the same time especially when applied to the albums more diverse and less abrasive songs such as the swirling and lysergic "Targeted", the eastern tinted "Till You Come Down" and the gently sedate and beautiful "I Want To Leave". It is however Peura's heavily fuzzed and distorted riffage driven by Gaughran's gnarly bass and Queenan's pummelling percussion that is the meat and potatoes of Sundrifter's sonic attack and the band deliver those elements in spades with songs like "Hammerburn", "Sky Peoples Son" and the doomic "Fire In The Sky" all hitting their marks with an unerring level of consistency. 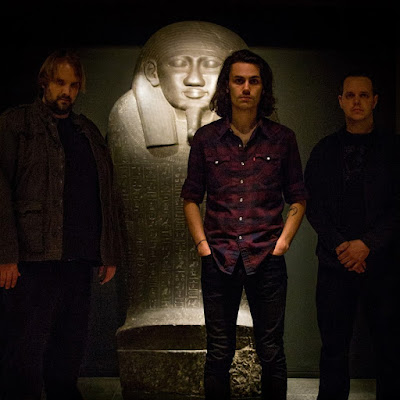