Athens, named after the Greek god of wisdom Athena, is the home of The Curf, three  Greek musicians who in their own words "ooze doom'n'groove". The bands current line up of Chris Androvitsaneas. (vocals and guitars), Spyros 'Pappous' Chrysochoou (bass) and Pepper Koll (drums) originally began life as a four piece releasing one album "I" (2007) with Apostolos Patronidis on drums and George "The Goat" Stavroulakis on rhythm and lead guitar but by the time of the release of EP "Royal Water"( 2016)  Patronidis had been replaced by Koll, a while later Stavroulakis left the band and The Curf were a trio. It is this line up, slightly stripped down but just as sonically explosive, that releases, for your listening pleasure, "Death and Love"(Fuzz Ink Records). 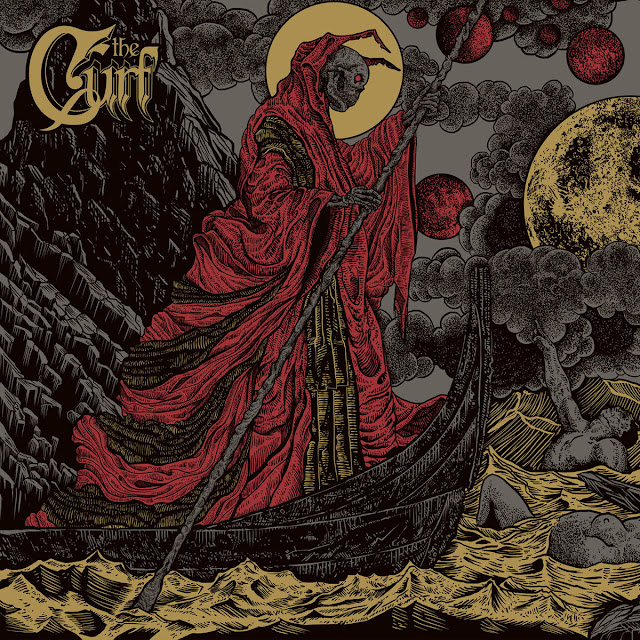 From the palm muted guitar riff that heralds first track "Dark Hado" to the sliding of strings that signals the end of final song "Death and Love" it seems, to this listener, that The Curf  have been looking a little deeper into themselves of late finding that side of themselves that is a little edgier ,a little less bright and sunny. Maybe its a reflection of the political turmoil and financial woe that Greece and the Rest of the World finds itself in today, its hard to say, but there is a definite air of darkness and heaviness to be found in the bands new opus that was not as prevalent on previous releases. Songs like "Let Go" with it's low slow doom groove and almost spoken vocals, and "Order'n'Sin", with its atmospheric feel and searing guitar solo's, are given an extra level of doomy gravitas by Androvitsaneas' low key, not overly powerful, but totally effective vocal tones that combine with his guitar, and the bass and drums of  Chrysochoou and Koll, to create dark atmospheric grooves of velvety smooth yet at the same time gloriously raucous doom'n'roll. The Curf are not averse to lightening the mood in places though as on "Smoke Rings", where the band hit a crunching hard rock stoner groove, and on "9-6" , a song with a thrash/punk like meter where vocal duties are handed over to guest vocalist Nancy Sim (The Burning Sticks, Immortality), although even here the band can't help from slipping into doom/psych mode, mid-section, before returning to the songs initial up-tempo groove. "California" sees the band recruiting another friend Babatsos, in on vocals, the singers blackened, harsh vocal style combined with the songs mixture of  punky aggression and low slow dynamics giving the song an almost hardcore punk meets black metal feel. 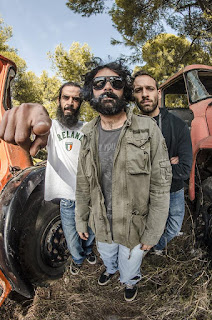 All in all "Death and Love" shows, over the span of nine gloriously delicious songs, a band who are steadily moving on an upward curve, a band feeling more confident to embrace moods and shades from other genres and incorporate them into their sound, a band who you the reader should, if you have not already, make a point of checking out .....