"Sisters are doing it for themselves" sang the Eurythmics (with a little help from Aretha Franklin) and sisters of the riff, Katie Gilchrest: (guitar / vocals), Megan "Whiplash" Mullins: (drums) and Mariana Fiel: (bass) are certainly testament to those lyrics, the Californian trio not only writing, arranging and playing all the songs on "High Priestess" (Ripple Music) but also having a hand in the mixing, mastering and artwork. 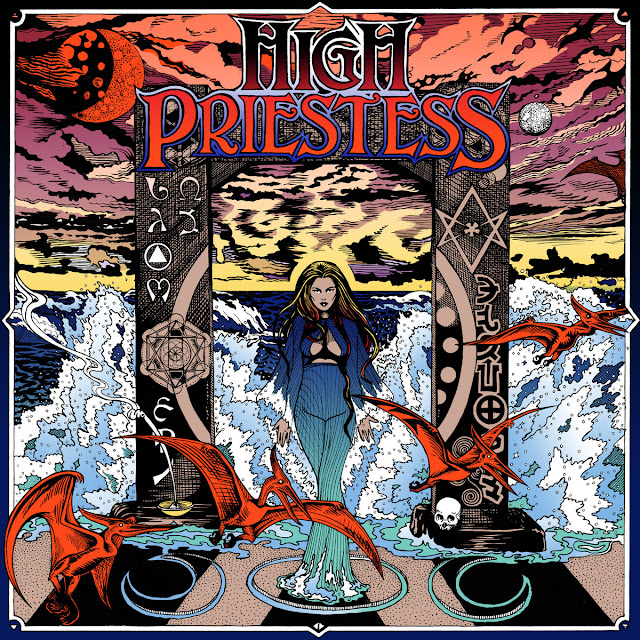 Desert Psychlist is partial to a little eastern promise and High Priestess deliver that in spades with first track "Firefly" a delightful doomy romp through eastern tinted desert soundscapes underpinned by Mullins tribal beats and Fiel's big bass lines and enhanced by Gilchrest's colourful keyboard flourishes,.the song gradually growing in weight and depth when Gilchrest switches to guitar and the band hit a low. slow but deliciously lysergic groove that sees the guitarist/keyboardist sharing vocals with Fiel, the pair harmonizing but with one just a heartbeat behind the other creating a sublime echo effect, their similar tones haunting and ethereal.
"Despise" follows and opens with Gilchrest's acoustic guitar and Fiel's  bass laying down a madrigal-like refrain that fades out to be replaced by an almost prog-like interlude with Gilchrest switching to electric guitar, sweeping  complex arpeggios over Fiels thrumming bass and Mullins sparse but totally effective percussion. The song then shifts up a gear into full on doom territory Fiels bass defiantly holding the middle ground while Gilchrest adds exotic touches of six string colouring and Mullins lays down a solid and pulverising array of percussive power beneath, the guitarist and bassist layering their haunting harmonies above it all. The song then goes into out there psych mode in its mid-section with Friels bass emitting all manner of grizzled noises and effects complimented by Gilchrest's swirling dark keyboards and Mullins thunderous drums before diving back into the doom again and taking the song to its conclusion.
"Banshee" finds High Priestess in lullaby mode singing serenely to a comfort a swaddling babe only to scare the living shit out of him/her when the hammer goes down and the band break into a powerful and frankly terrifying full on stoner doomic groove replete with screaming and howling vocal effects.
"Take The Blame" sees the band exploring a more stoner doom sound, laying down the fuzz hard and thick, the band jamming a sound that that has a distinctly Swedish feel, emulating but not copying those blues flecked grooves that are often the territory of Graveyard and Witchcraft
"Mother Forgive Me" puts High Priestess back in more familiar country, ethereal harmonies sang (and in this case also whispered) over low ,slow grooves of lysergic doom anchored by grizzled bass and pummelling percussion all overlaid with deliciously seductive guitar colouring.
"Earth Drive" closes the album with an atmospheric, slightly folky doom torch song taken to another level by Gilchrest's soaring guitar solo and hauntingly sweet vocals and harmonies, melodic yet with an underlying feeling of darkness it leaves the listener in no doubt that High Priestess are a band they will want to hear a lot more from in the future.
Check 'em out .....