Minnesota trio Buzzard, Pete Campbell (guitar, vocals ), Andy Campbell (drums) and  Gene Starr (bass), are all seasoned musicians who have frequented the line ups of some of the stoner/hard rock scenes most well respected bands, Sixty Watt Shaman, The New Suns. Place of Skulls and The Mighty Nimbus to name just a few. With a wealth of experience like this behind a band you would expect the resulting noise that these guys could make together to be something a little special and you would not be wrong, just give their brand new EP " Buzzard" ( Stone Groove Records) a listen just  to see how special! 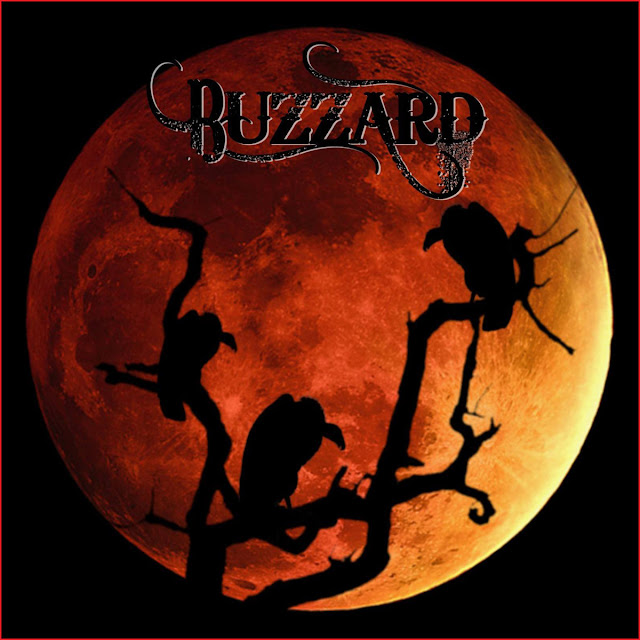 Utilising a bank of influences that include among others Grand Funk, Blue Cheer and Mountain it is hardly surprising that the four songs that make up "Buzzard" have a distinctly proto-metal, heavy rock feel to them, The trio combine to create a sound and groove that is very much of  today but contains a spirit and feel born of another era, at times seeming as if the band had been plucked by a giant hand from the seventies and placed in a modern studio and told to make some music.
"Never Again" kick-starts "Buzzard" the band jamming a deliciously proto groove  built around Gene Starr's gnarly, gloriously grizzled bass riff. Andy Campbell sit beneath this riff complimenting Starr's bass line with his percussion, the drummer steering the groove rather than driving it and allowing Pete Cambell's  guitar to fill out the spaces with shards of reverberating chordal colouring and soaring solo's. The guitarist also handles vocal duties his low, warm soulful tones a perfect fit for the grooves played beneath them, clean powerful and measured they add an extra dimension of class to what is a very classy collective performance.
"Keep Me Comin'" begins with Pete Campbell chopping out a funky, effect laden, chord  progression unaccompanied before being joined by the drummer and bassist in a stop/start hard rock refrain, the fractured nature of the groove combined with the equally fractured meter of the vocal delivery strangely adding to its feeling of depth. Once again Starr's bass is the anchor around which the song is based but this time Andy Campbell is allowed the freedom to express himself, the drummer using every inch of his kit to great effect combining with Starr and his namesake Pete Campbell to give the song a strutting swagger.
"Is You Is" finds Buzzard exploring their darker side both musically and vocally, the band sprinkling a little Sabbath-esque proto-doom into the proceedings and using a mixture of clean and growled vocals to embellish the songs lyrics
"Blood Secrets" stays in the darker territory visited on the previous track and finds Pete Campbell stepping out from his role as sound colourist and really embracing the spotlight, his riffs and solo's driving the song and the rest of the band  through a series of subtle changes in time and tempo as well as providing an excellent, understated but totally effective, vocal performance. 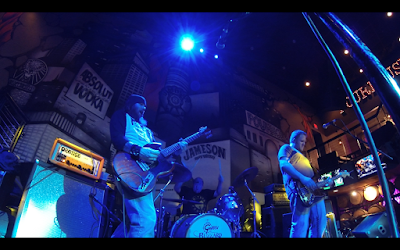 It would of been nice to have a few more tracks to slaver and drool over but beggars cant be choosers and what you do get with "Buzzard"is four songs (five if you include the live cover of Robin Trower's "Bridge of Sighs" that comes with the download)  of  high quality, well written and delivered kick-ass rock music with a slightly retro feel that should tide you over nicely until their next release.
Check it out .....