Leicestershire's Mage will not be a new name to those familiar with the UK's stoner/doom underground scene, the East Midland groovmeisters have been a constant force on the scene since their inception in 2010 releasing two well received albums "Black Sands"(2012) and "Last Orders"(2014). as well as gaining a reputation for being a fierce live draw. Things took a sharp downward curve last year after the loss of their guitarist Ben Aucott but after a period of  mourning and reflection the band recently reconvened in the studio as quartet to record their latest album "Green" (available here.) 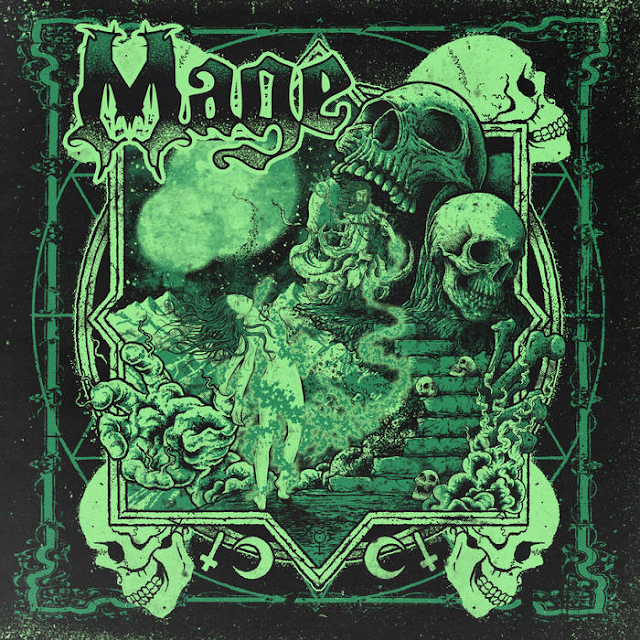 "No Where To Nothing" kicks things off with the Mage jamming a Sabbathian proto-doom groove replete with Iommi-esque guitar colouring pushed hard by a backdrop of storming bass and drums over which clean throaty strong vocal tones are delivered. At just over the halfway mark the song takes a slightly left of field turn, moving from mid tempo proto to low,slow and heavy with the vocals taking on a hazy psychedelic hue underpinned and taken to the close on a wave of heavily fuzzed guitar, throbbing bass and pulverising percussion.
"Heroic Elergy" sees Mage taking the lower, slower aspects of the previous tracks finale and expanding on them while at the same time adding to them element of swirling psych and space. It's hard not to believe that the songs dark lyrics of battle and loss, bolstered by the recurring mantra of "fallen brothers, we'll see you on the other side", is not something informed by the band recent loss, if this is indeed the case then this acts as a fitting tribute to their own "fallen brother".
"Primitive Drive" begins with tribal-like drum beats before being joined by a thunderous rolling guitar riff broken momentarily by crunching doom laden  powerchords, the groove tantalisingly swinging back and forth between the two dynamics before proceeding ahead on the latter. Vocally darker than previous tracks, with a mix of clean and semi-harsh tones, the song veers close to the extreme in places but is pulled back from the abyss by it's clever arrangements, effectively blending melody and menace together in a mouth watering blend of both.
"Green" is next up, it's circular stoner doom groove underpinning a lyric that pays homage to the beauty of nature's open spaces sang around a wah drenched guitar motif under which a thunderous foundation of booming bass and pounding percussion is laid.
"Eclipse King" utilises swirling dark guitar colouring over a slow to mid tempo doom groove creating an atmospheric feel that borders on traditional doom but has its roots in Sabbath-esque stoner territory.
"The Wheel" picks up the pace a notch or two and sees the vocalist roaring clean impassioned lyrics bemoaning the circle of life over a galloping heavy stoner groove that employs a chugging guitar refrain embellished with twisty little fills and hooks. Broken briefly, mid song, by some nasty slow/low doom with thick fuzz drenched chords reverberating over pulverising rhythmic thunder, it then swings back into the main riff and is taken to the close.
"Vultures Mass" closes the album and starts innocently enough with dark guitar arpeggios gently picked over an almost jazzy backdrop of brushed skins and low throbbing bass before erupting into a volcano of heavily fuzzed and distortion soaked doom, subsiding briefly back into tranquillity before the hammer goes down again and the listener is pummelled and awash in a sea of heavy riffage. The singer tells of being "laid bare to my bone, sunburnt, ragged and raw" over a soundtrack thick with musical malice made darker by an emotive, soaring guitar solo and the addition of demonic tones mirroring those of the singers giving the songs already blackened groove an extra malevolent and menacing dimension.
Mage are back, a little bit battered and bruised, still grieving for their fallen brother but channelling those feelings into an album that's as strong if not stronger than anything they've done before.
Check it out ......