A recent debate took place within one of the many "underground" rock groups on Facebook concerning what constitutes "stoner rock" and what is "stoner metal", opinions were thrown back and forth with many confusing matters by assigning some bands in both categories. The general consensus, however, was that "stoner rock" took it's lead from the hard rock bands of the 70's while it's metallic cousin referenced the later metal of the early 80's.
With this in mind  it would seem that Sweden's Grand Delusion, a four piece from Umea consisting of  Per Clevfors (lead guitars, backing vocals), Mikael Olsson (bass guitars, keyboards), Magnus Rehnman (drums, backing vocals) and Björn Wahlberg (lead & backing vocals, guitars), who play heavily fuzzed grooves with an 80's metal bias fall very much under the "stoner metal" banner, but make your own minds up by giving the bands latest release "Supreme Machine" a listen. 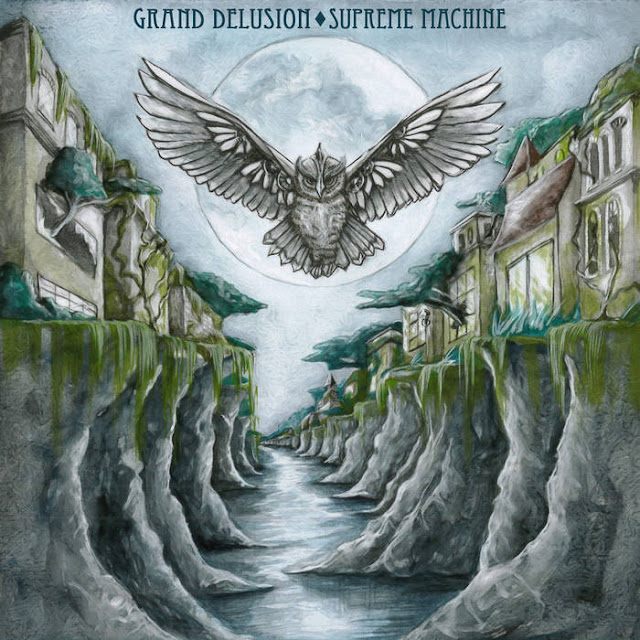 "Just Revolution" gets the ball rolling, its slowly throbbing, slightly doom-ish intro segueing into an anthemic stonerized heavy metal groove that recalls both musically and vocally early era Grand Magus and sees Whalberg playing call and response with  Clevfors and Rehnman's powerful backing vocals over a foundation of pounding rhythm and thunderous metallic riffage.
"Mangrove Blues" sees Grand Delusion adding a little bluesy, albeit heavily metallic,swagger to their arsenal, utilising a gloriously addictive guitar motif around which the band lay down a plethora of differing time signatures and tempo's anchored to the earth by Olsson and Rehnman's thunderous bass and drums and coated in superb strong clean vocal melodies.
"Trail Of The Seven Scorpions" begins its life all complex and  prog-like  before gradually shifting gears and segueing  into a slightly traditional doom groove with  Maiden-esque undertones overlaid with a strident vocal melody. Around about the halfway mark the song takes a left turn into ambient territory with Olsson laying down a swathe of textured keyboard colouring, paving the way for Clevfors and Wahlberg to take the song to its conclusion on a wave of  Floydian guitar interplay.
"Imperator" follows and finds Grand Delusion once again blending traditional doom atmospherics with grooves of a more "stoner metal" nature. The song swings tantalisingly between both musical dynamics with Wahlberg roaring his lyrics of glory and death against a backdrop of pounding percussion and heavy metallic riffage, superbly backed up on the chorus by Clevfors and Rehnman's Nordic/gothic backing vocals, that are further enhanced by some sterling fretwork from both guitarists.
Swirling keyboards and low gnarly bass herald the coming of next track "Infinite", the song then taking on a slightly (MK II) Deep Purple-ish hue before shifting into epic, but nonetheless stonerized , metal territory. Wahlberg's vocals take on a slightly more aggressive tone here, his throatier and ever so slightly blackened roar hovering menacingly over a backdrop of pulsating grandiose metal groove that is taken to another level by it's flourishes of swirling space like keyboard texturing.
"Ghost of the Widow McCain" closes the album and sees Grand Delusion walking down the stoner side of the street with fuzz drenched riffage graced by touches of southern rock swagger informing the songs groove. Gritty, deliciously addictive, with a hard not to love southern flavoured vocal melody and a scorching neo-classical guitar finale, it recalls the more metallic southern grooves of Jacksonville's Molly Hatchet in places.
Whether "Supreme Machine" falls into the categories of "stoner metal" or just good old fashioned "heavy metal" does not really matter, what matters is whether it ROCKS or NOT.... and this does!
Check it out .....

Posted by Desert Psychlist at 13:09