Finding kick-ass Brazilian grooves is becoming the norm of late with bands like Stonehouseonfire, Black Witch, Pesta and Old Stove all making inroads into the international underground market with some seriously essential sounds. Latest band to have caused the ears of the stoner/doom and psych community to stand up and take attention consist of Felipe Cazaux (guitar / vox), Capoo Polacco (guitar), Hamilton de Castro (bass) and PH Barcellos (drums), a four piece hard rock band going by the name of the Mad Monkees from Fortaleza in North-eastern Brazil, a band who have only been together since 2015 but who, with the release of their debut, self titled album "Mad Monkees" are already making waves both within their own country and outside of it. 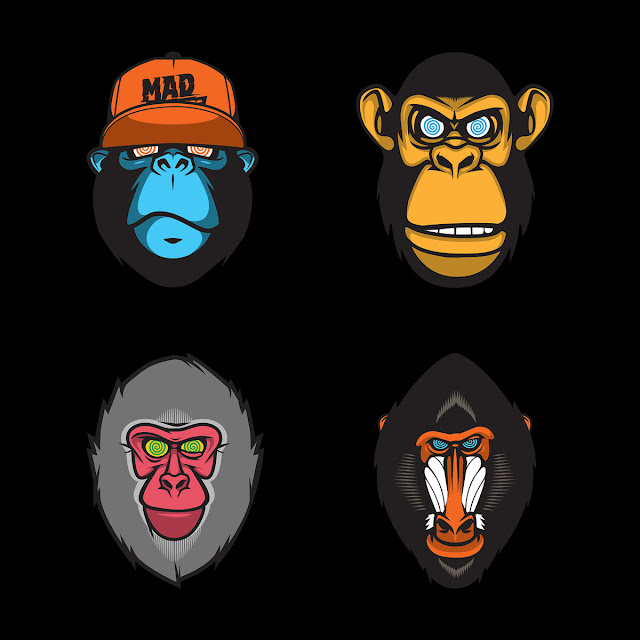 Mad Monkees, both band and album, deliver the kind of rock once classified as "hard" but nowdays more and more is found falling under the banner of "stoner", in other words ..riff fuelled grooves powered by an underbelly of tumultuous drums and big gnarly bass lines overlaid with fuzzed/ overdriven guitars and coated in grizzled clean vocal tones. Where Mad Monkees differ from the thousand and one bands ploughing similar furrows is in the sheer joie-de vivre they bring to the table with their 70's inspired refrains and rhythms, filling songs like the hard driving "Bombman", the southern flecked "Try Harder(Again & Again) and the bluesy "Deamons and Angels" with an uplifting sense of fun and excitement, a sense that transfers perfectly to record and one that is both  highly enjoyable and infectious. The band keep things focused and tight by delivering their grooves in short sharp bursts, no meandering twenty minute opus's to be found here, only one tune of the album's ten stretching past the four minute mark, giving the album a more immediate and direct feel, but even with this feeling of immediacy the band still manage find time to invite a few guests on board with Anderson Kratsch (Marrero) helping out on vocals on "Bombman", and Emmily Barreto (Far From Alaska) vocals on "I Cannot Feel" as well as additional guitar from Estevan Sinkovitz (Marrero) on "Bombman" and Klaus Sena contributing bass on "Try Harder (Again & Again)".
Brazilian rock is growing stronger and stronger by the day but there is still a way to go before it can compete on an equal footing with those grooves regularly coming out of Europe and the USA, but if bands like Mad Monkees are an example of what Brazil has to offer then it won't stay that way for much longer.
Check 'em out ....