It's hard when mentioning Maryland, USA not to immediately think of the areas affiliation with the doom metal genre, like fish with chips and lamb with mint sauce, the two just seem to be tied together. The Obsessed, Pentagram, Place of Skulls and Earthride are just some of the bands to come out of what is affectionately called the "Doom Capitol" ( D.C.).
Blood Raven, Dana Helmuth (guitar and vocals),Chris Andersen (guitar) Scott Golley (drums) and Gabe Solomon (bass), are the latest Maryland band to chance their arm in the international doom market. The four guys, who have plied their respective trades in bands like Motherload, Corpse Grinder, Chaos Emblem and Lifetime, have come together, under the Blood Raven banner, to stake a claim for a place on the pedestal of Maryland doom heroes with the release of their debut album "Jotunn". 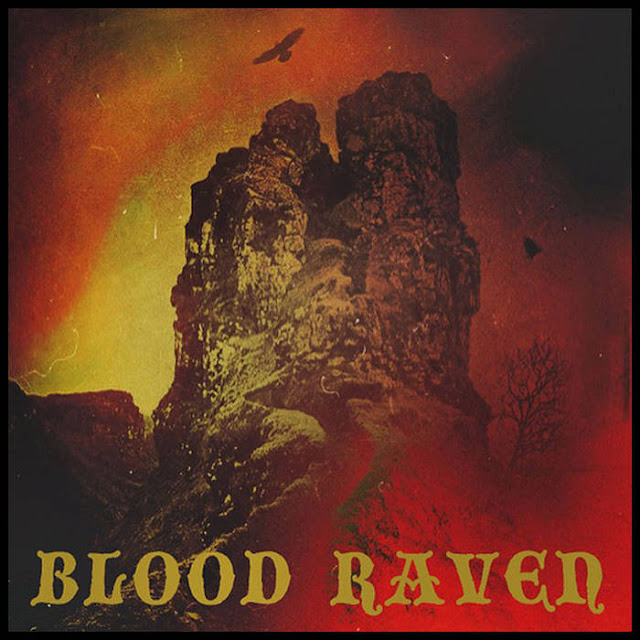 "Hour Of The Dragon" kicks into life on a rolling hard rock riff, one you will swear you've heard before but can't put your finger on where, the song is enhanced by colourful fills and licks and pushed hard by Solomon's gnarly bass and Golley's pulverising percussion causing it to seep deep into the listeners psyche pulling him/her deeper into the songs gloriously enslaving groove. Helmuth as well as, with Anderson, delivering thick slabs of grizzled riffage and scorching solo's also handles vocals, his grizzled, slightly sneered clean tones a perfect fit for the dark menacing grooves surrounding them, vocals and music combining to create a whole as great as it parts.
"Smoke Is Rising" sees Helmuth's vocals getting a little grizzlier and sludge-like, his darker bellowed tones roared over a groove informed by doom but with one foot tantalising dipped in the waters of the blues. This bluesy influence might not be immediately evident in it's initial heavily plodding doom refrain but is something that becomes glaringly obvious as the song reaches its gloriously soaring finale when,with Anderson laying down thick crunching riffage ,Helmuth pulls off searing bluesy minor pentatonic solo's over a backdrop of thunderous rhythm.
"Blood Will Flow" is up next and finds Anderson and Helmuth locking into a high- tempo proto-doom refrain, the two guitarist filling out the songs groove with little curly fills and licks over Golley and Solomon's incredibly tight rhythm work.
"Black Moon" slows down the dynamic slightly and sees Blood Raven getting down and dirty on a song that falls heavily into stoner doom territory but one that still retains, mainly because of Helmuth's searing guitar work, an element of heavy bluesy swagger at it core. The vocalist/guitarist, superbly supported by Anderson's grizzly fuzz drenched guitar, Solomon's booming bass and Golley's tumultuous percussion, roars like a wounded bear while peeling of one scintillating solo after another.
"Four Directions" sees elements of dark swirling space and psych creeping into Blood Ravens dark stoner doom attack with Helmuth's, slightly phased, hazy, but still bear-like, tones roaring over a dark pounding heavy backdrop of pulverising low/slow doom taken to another level by Golley's Bonham-esque percussion and Solomon's bone crumbling bass lines.
"Shadows Of The Western Moon" brings "Jotunn" to a close with an epic display of atmospheric stonerized doom and bluesy sludge. Anderson and Helmuth lay down a swathe of heavily phased guitar colouring over which Helmuth bellows and roars dark lyrics asking to be "set free". It might be Desert Psychlist's imagination, and maybe in part as a result of Golley's pounding drum work, but there is an element of Led Zeppelin's arrangement of "When The Levee Breaks" nestling beneath this tome that gives the song an epic and grandiose feel. 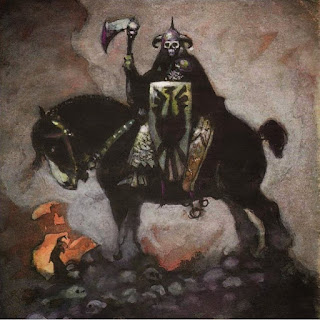 Heavy, atmospheric and with real quality to both the songwriting and arrangements, Blood Raven's "Jotunn" is a statement to the world that Maryland remains now and always the Doom Capital of the World!
Check it out .....