Luc Hess and Jona Nido are Closet Disco Queen a two piece instrumental pairing from Switzerland who like to play heavy grooves of stoner/hard rock built on a foundation of pounding rhythms soaked in swathes of fuzz drenched guitar riffage, all of which can be heard on the bands new EP "Sexy Audio Deviance For Punk Bums" (Hummus Records). 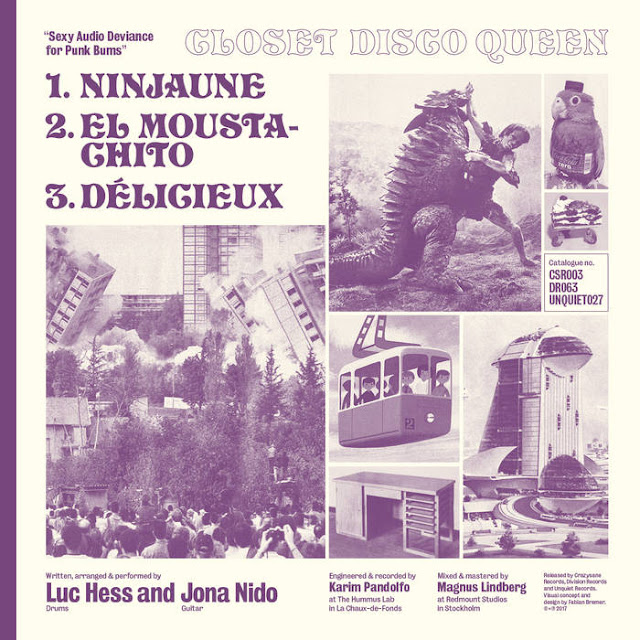 "Ninjaune" is the first of three songs and begins with orchestral like effects swooping back and forth across the speakers that are then joined by an almost military drum pattern, this carries on for a few bars before seguing into a slightly heavy Colour Haze-ish groove sporadically fractured by stuttering guitar riffage and pushed by tumultuous percussion.
"El Moustachito" is up next and begins by laying down an insistent repeating guitar motif that when joined by the drums slowly builds layer by layer until exploding into a gritty stoner groove replete with warmly fuzzed out guitar licks and scorching solo's.
"Dèlicieux" closes the EP with Closet Disco Queen mixing it up by layering reverb drenched guitar colouring over solid percussion then slowly increasing the tempo and dynamic, gradually dragging the songs direction into complex prog-ish areas while at the same time adding a little fuzzy funkiness into the mix.
The band cite Russian Circles as an influence and there are elements of that Chicago trio's grooves scattered around here but the overall impression while listening to this EP is that of a slightly more sophisticated Karma To Burn, classy moments but with a big emphasis on groove, check it out .....

Posted by Desert Psychlist at 01:41