Very rarely does Desert Psychlist review releases with less than three or four songs but we felt that an exception had to be made in the case of Puente Diablo's latest release "Sol Negro" a two song outing that not only showcases a band at the height of their powers but also is a fine example of the quality of music currently coming out of Chile. 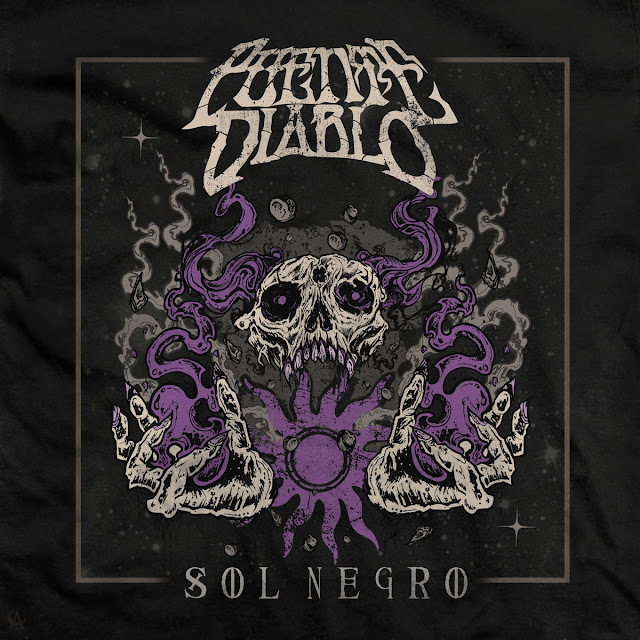 Puente Diablo's previous releases, "Demonizado" (2016) and "Tierra Ancestra" (2017), were very much straight ahead affairs with the band finding their feet by delivering grooves that sat at the more stoner/hard rock end of the rock spectrum , the trio fleshing out those grooves out with only the occasional forays into doom and psych. "Sol Negro" is a different animal altogether, the songs that make up this two song opus still draw from the same musical pools explored on previous releases but those doom and psych aspects of the bands sound have this time been pushed much more to the fore. Title track "Sol Negro" is a prime example of this more swirling psych/doom dynamic, it begins with crunching guitar refrains and thunderous rhythms, decorated with clean gritted vocals (sung in Spanish), but then takes a detour into a more ambient psych territory that sees Alex Retama (bass/vocals) and Mauricio Navarro (drums) laying down an ambient post-rock/fusion groove over which guitarist/vocalist Daniel Alarcón delivers ringing arpeggios and fractured chord voicings as well as a little traditional Andean pan piping, the band finally returning to crunch and thunder mode to take things to the close. Second, and final, song "Largo Viaje" is an atmospheric and somewhat emotional tour-de force that begins with a stunning psychedelic intro built around low deep bass and shimmering percussion over which Floydian guitar textures swell and swoon. The song slowly morphs into a mid to slow heavy doomic groove that is cleverly tempered with exquisite blues flavoured guitar solos that swoop and swirl over and around some superbly pitched vocal harmonies and the occasional sampled narrative, the songs only downside being it has to end.

They say that from small acorns great trees will grow and if we consider the two songs that make up Puente Diablo's "Sol Negro" to be the seeds of a more expansive and experimental sound for the band to build upon in the future then let's hope that these two trees soon turn into a forest or better still a full album!
Check 'em out ...
© 2021 Frazer Jones
Posted by Desert Psychlist at 09:27