Sludge is often described as the place where stoner rock, doom and the blackened metals meet and hang out together and some might regard "sludge" as the perfect description for what, Afghan Haze, the subject of this review, bring to the table with their latest release "Nihilistic Stoner Hymns". Trouble is Afghan Haze don't quite fit into the neat little box "sludge" provides, their music is blackened but not overly brutal, their grooves are stonerized but not overly fuzzy and their doom is dark but not exactly dank. So where does this leave these Connecticut riffmeisters in the great scheme of things? The answer is exactly where they want to be. 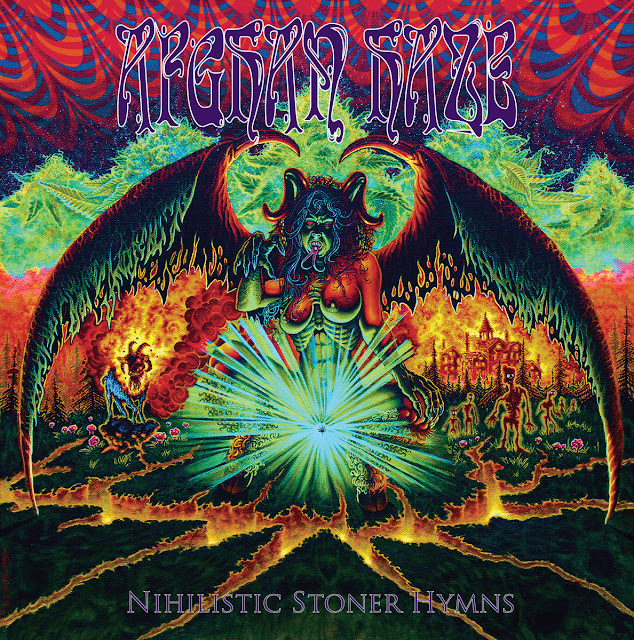 Afghan Haze are a band driving a cherry picker through the orchards of underground rock and metal, plucking grooves from the assorted genres and sub-genres like fruit from trees, using what they deem fits them discarding what they feel doesn't. Afghan Haze could be described as a band who play heavy music but the truth is most of the bands "heaviness" comes not from their music, which is a mixture of gritty stoner rock, spaced out hard rock and doomic psych, but from the vocals they choose to decorate that music with. Low, graveled vocal tones, growled in a style that brings back memories of early Opeth, and in places Ordos, are the tones that adorn each and every one of the seven songs that make up "Nihilistic Stoner Hymns" and it is these tones, often incanted rather than sang, that gives songs like "Burn The Goat", "(Welcome) To Drug Mountain" and "Southern Bastard Church" an impression of heaviness that is not always reflected in their grooves. Don't however begin to think that the grooves surrounding those distinctive vocals are bereft of heaviness, because that is not the case, you will find all the requisite crunch and thunder you could ever hope for from an album carrying tags that include doom, metal and stoner it is just that those elements of crunch and thunder are tempered by aspects of swirling psych and bluesy old school hard rock that are delivered with a clarity and cleanliness that, on occasions, belies the vocal tones that those grooves support. 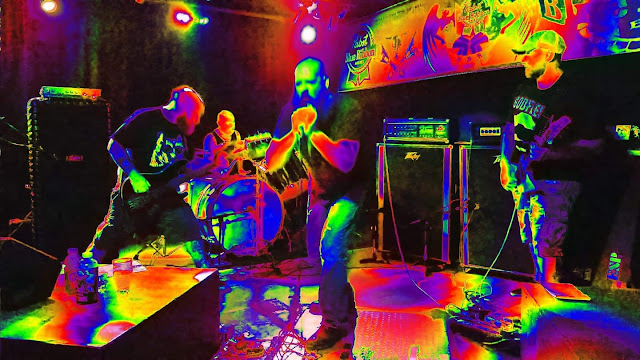 Visceral and brutal are words often used to describe music of the nature Afghan Haze present us with on "Nihilistic Stoner Hymns" and often music described as such tends to lose a little of its musicality due to its harshness and ferality. Although there are moments when those two words could well be brought in to play when describing Afghan Haze's sonic attack the truth is those moments are few and far between and instead we are presented with a music that is certainty loud, certainly gritty but at the same time, and despite its blackened approach, is at all times musical.
Check 'em out .....
© 2021 Frazer Jones
Posted by Desert Psychlist at 04:38