HEAVY RELIC ~ THE APPARITION OF THE GRAND CABALA ...... review

Let's be honest here, Desert Psychlist is unsure whether Heavy Relic is the work of one man (Nick Toone, a self confessed Earthless/Ozric Tentacles/ Samsara Blues Experiment fanboy)) or the work of that same one man in collaboration with a bunch of unnamed musicians, especially as Heavy Relic refer to themselves (or himself) as "we" in their/his on-line presence. For the purposes of this review Desert Psychlist is going to assume that Heavy Relic are maybe a bit of both, if we are wrong we are wrong but at the end of the day its the music that matters and not the personnel, and the music presented to us on Heavy Relic's eleventh release "The Apparition of the Gran Cabala" is something a little special! 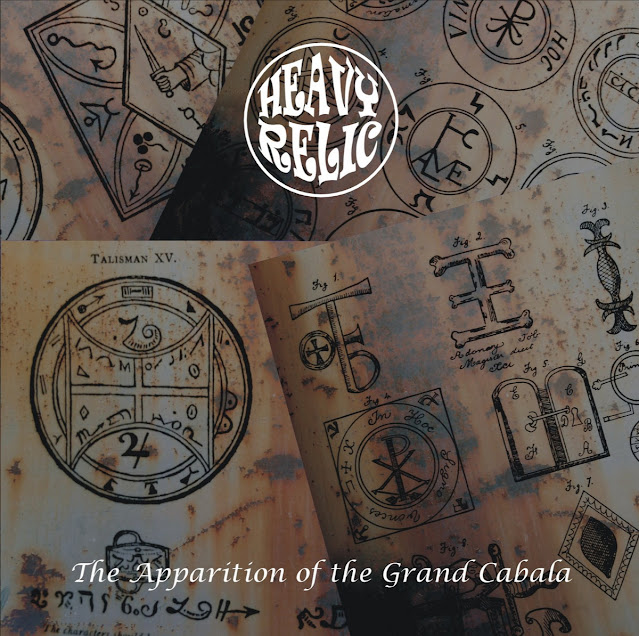 Heavy Relic's new opus kicks off with "Tritone Heavy" a track inspired by the discovery (to Heavy Relic) of a new tuning that in their words makes things "pretty weird". Weird is a fairly good description of the sounds Desert Psychlist is hearing emanating from our battered speakers as this track unfolds, with dark, ominous and dissonant three other words we could easily add to that list. There are points during the tracks duration where the guitar solos seem to be fighting to break free from the directions the rhythms thundering out beneath have planned for them but strangely this is something that works in the songs favor creating a twisted warped feel to the proceedings that gives everything a pleasing off-kilter feel.  "Nocturne" is no less twisted and warped than its predecessor, in fact it may even be more so, its dark and swirling guitar work swooping in out and around a groove that starts off low slow and doomic then gradually increases until almost reaching a thrash like meter. We mentioned dissonance earlier but we were, maybe being a little premature as next and title track "The Apparition Of The Grand Cabala" knocks any atonality and discordance that might have gone before into the proverbial cocked hat. Here we have a song that refuses to adhere to any rules, it is a song that is as ugly as it is beautiful and as chaotic  as it is structured, a perfect storm in musical form that defies written description and needs to be heard to be believed. Finally we come to "Henbane" the second longest track of the album and probably its most doomic, its thunderous dank groove the backdrop over which lysergic laced lead breaks scream and screech and strange space-like effects sporadically burble and bleep making Heavy Relic's earlier "pretty weird" description seem somewhat of an understatement. 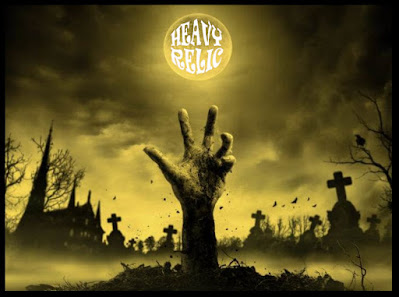 It was announced on its release that Heavy Relic's last album, "Opalescent". was going to be the band/artist's swansong but along came Covid and with nothing much else to do other than make music instruments were once again picked up. There are not too many positives to be found in a global pandemic but we at Desert Psychlist think "The Apparition Of The Grand Cabala" could well be one!
Check it out ....
© 2021 Frazer Jones
Posted by Desert Psychlist at 09:38