Troll Teeth, J.W. "Moe" Eccles (bass/vocals); Peter "Pretty Boy" Trafalski (guitar) and Kyle "Thuds" Applebaum (drums), hail from New Jersey, USA, the band have gone through numerous comings and goings since their formation but whatever the line up the onus has always been on delivering grooves of the very highest standard and that standard could not come any higher than the grooves delivered on the bands third album "Goes Nowhere, Does Nothing"(Electric Talon Records). 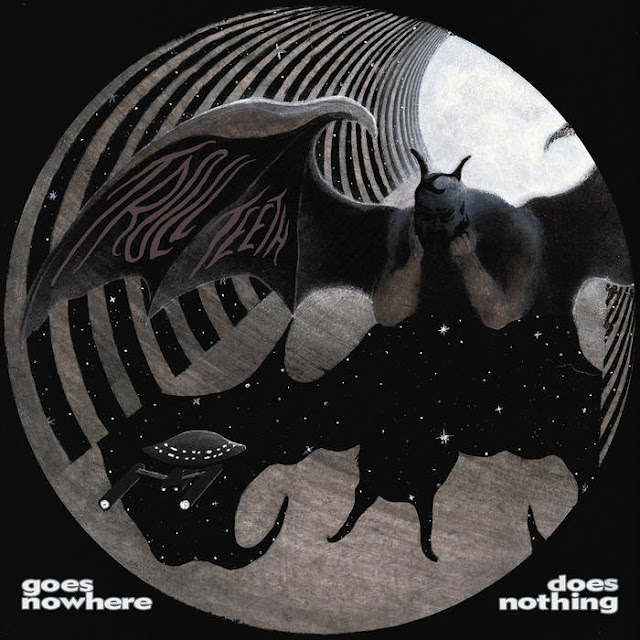 Troll Teeth have saved Desert Psychlist the job of describing what they do musically by writing on their Bandcamp page the legend "heavy, catchy riffs played for a while with some sweet, velvety lyrics". Now we could leave it at just that and move on to another review, especially as it is a very apt and fitting description, but us being us we feel we have to elaborate on that statement.
Catchy is a term used in music to describe riffs, melodies and grooves that hit the ear and stay there, well placed hooks that grab a listeners attention and then reels them in like an angler playing a fish. "Goes Nowhere, Does Nothing" is packed solid with these hooks but doubles up their impact by tying them into a sci-fi themed concept that tells of a mission that descends into a nightmare. Unlike some concepts that tend to go off on tangents "Goes Nowhere, Does Nothing" tells its story much like a comic novel, each song being a chapter and each chapter/song following on from the previous one. "Sword of Progress" opens the story by describing our heroes beginning their journey full of hope and excitement, eager for adventure against a backdrop of chugging upbeat guitar riffage driven by a solid tight rhythm section around which clean, clear vocals tell of a trip that will take "us to whole new worlds". Following track " Trapped In a Bottle" comes in two distinctive parts, the first part tells of an untested commander, and the slight resentment of a crew being told what to do by a man unproven, and is backed by fractured, heavily effected, guitar chords reverberating over a spaced out lysergic groove, while the second part tells of a distress call that changes everything and finds the band falling into a stonerized bluesy groove replete with swirling guitar solos, growling bass and heavier more thunderous percussion. "All Hands On Deck" describes our crew apprehensive but excited by their new unexpected rescue mission and has a more stonier doomier musical vibe while following track "Reconnoiter" has a spacey hard rock groove and depicts some of the crew beamed down to the surface of an unexplored planet with apprehension being slowly replaced by fear as they get their first glimpses of something ominous afoot. "Turncoat" tells of betrayal and lies over a backdrop of strident percussion and grizzled bass that is decorated with screaming guitar solos that at times border on dissonant but are, at all times, totally mind-blowing, the last lines of the songs lyrics, "Not a word can be said If anyone asks they were already dead" telling you all you need to know, not only about the calibre of the man in charge of this mission, but also the fate of those men he leaves behind. "Running Out of Time" uses a mixture of Caribbean pulses, space-rock swirls and bluesy heavy psych to tell its tales of denial and accusation, its atmospheric, mournful meter boasting some of the best feel based guitar playing Desert Psychlist has heard in a long, long time. The prog(ish) "Emergency" follows and throws an interesting twist into the story, was the distress call that brought the crew here actually them and are they somehow caught in a ever revolving time loop cursed to relive their experiences over and over again. That question is somewhat answered by the songs final verse and the line " This loop - goes on - and on and on". The twelve minute plus epic "Kokabiel" closes proceedings and finds the so called monster of this piece, a huge space spider,  telling his side of the story to a soundtrack of some of the best blues based heavy psych you are likely to experience this side of this coming new year, or for that matter the next one.

Concept albums are always a little hit or miss but Troll Teeth's " Goes Nowhere, Does Nothing" is all hit! This is a concept that tells its story just how you might read it from a book, easy to follow, full of the requisite villains and monsters that you would expect from a good tale but also with just the right amount of mystery and ambiguity to keep you guessing. The fact that Troll Teeth back this concept with complex intricate music of, what can only be described as, the highest quality is testament to not only their ability to tell a story but also their skill as musicians and songwriters.
Check 'em out .....
© 2020 Frazer Jones

Posted by Desert Psychlist at 12:09