Wales does not get the credit it deserves in musical terms, when someone mentions Wales in a musical context probably the first things people think of are Tom Jones and Welsh Male Voice Choirs but Wales has given us some absolutely killer rock music over the the years, psychedelic jamsters Man, proto-metallers Budgie, dub/reggae metalists Skindred, agit-rockers Manic Street Preachers and that is without mentioning current weed warriors Dope Smoker. The latest band hoping to cement their place in the annals of Welsh rock history go by the name Swamp Thief, a duo consisting of Simon Bevan (vocals/guitar/bass) and Marc Lockwood (drums), who's debut EP "I" is an enthralling blend of swampy sludge, raucous stoner rock and grizzly heavy blues. 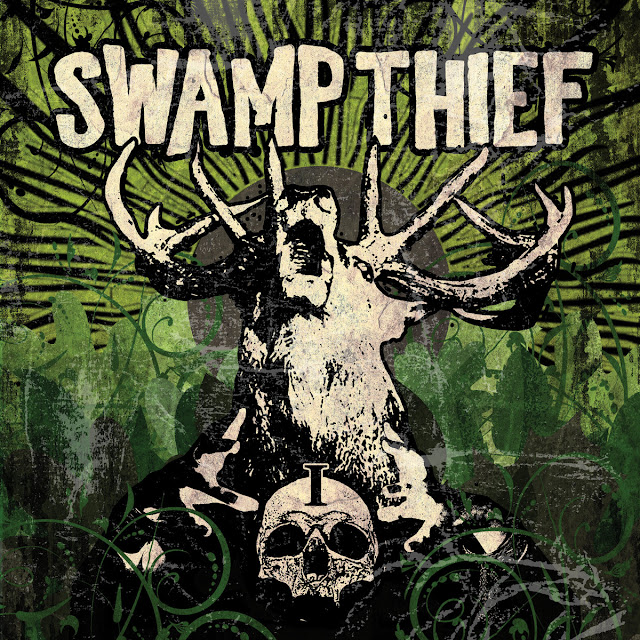 For just two people Swamp Thief create a hell of a lot of noise, in fact.at times during "I", it is damn hard not to be fooled into thinking that you are listening to a quartet or a quintet, such is the force of sound that Swamp Thief create with just the minimum of instrumentation. First track "Mary" exemplifies this perfectly it comes out of the traps with every drum beat sounding like an explosion and guitar tones dialed to gnarly the duo hitting a groove that will tick every stoners boxes and then some they won't even know exist. The band don't opt for easy options either, it would be so simple for them decorate tunes like "Whip Hand", Maelstrom Queen" and "Tides" with harsh, gutteral vocals to match the intensity and sheer volume of their grooves but when you have a guitarist/bassist who can not only riff and solo like a man possessed but also possesses a voice strong, powerful and edged with a southern rock type grittiness ..well you got to use that voice. For all their volume, crunch and sludginess Swamp Thief also have songs, the duo may swamp those songs in lashings of thick distortion and fuzz, they may drive those songs with percussion so powerful that it could probably register on the Richter scale but they DO have those songs and for all their bluster and bombast those songs, to use an old jazz term, swing! 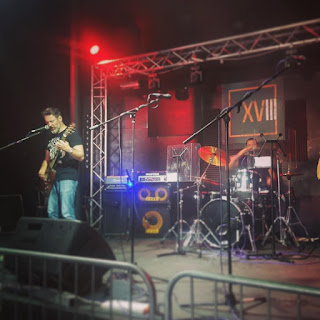 Don't, when approaching Swamp Thief's "I", expect to hear a stoner/sludge version of The White Stripes or The Black Keys because even those two well respected duo's, would be hard pushed to match the sheer ferocity and gnarliness that these Welsh wizards bring to the table. To say this EP kicks ass would be an understatement, "I" doesn't just kick ass it beats the crap out of ass and then drops a stack of amplifiers on it!

Posted by Desert Psychlist at 11:26