THAMMUZ ~ INTO THE GREAT UNKNOWN ....review

The Dutch always seem to bring that something extra to the party in regards to rock music, back in the day it was Focus and Golden Earring turning up with yodels and killer bass lines, later on it was The Devil's Blood sweeping the tables clear of food and drink to indulge in their Satanic rituals. This year the party crashers with that extra added something are Thammuz, a collective hailing from Gelderland, a province close to the Dutch border with Germany. Thammuz are the coming together of musicians from two Dutch bands, Dreckneck and Fuzzboar, their aim is to merge their love of all things psychedelic with their love of a heavy groove, to see if they have achieved that aim Desert Psychlist took their debut full length "Into The Great Unknown" for a spin.. 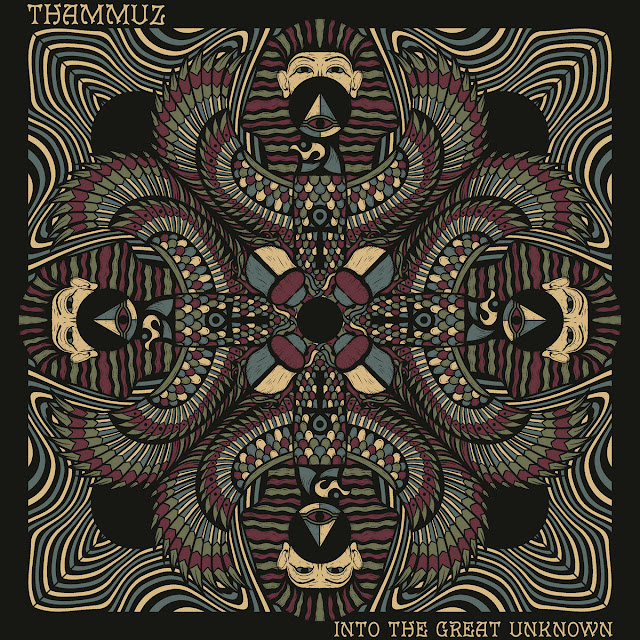 The aptly titled "Intro" kicks things off with 35 seconds of sonic mayhem that then segues into "Speed Machine" a song that comes across like a stonerized desert version of Deep Purple's "Highway Star" but without the references to engines and wheels, its vocal boasting, in graveled tones, of letting "demon's tell me where to go" and "going fast like you never seen" against a backdrop of infectious gnarly assed desert groove. Title track " Into The Great Unknown" raises both the heat and tempo by bursting from the speakers in a explosion of heavily fuzzed guitar and bass refrains driven by punishing strident percussion, the songs full on punkish vocal delivery the perfect match for the songs aggressive attack. "Memoirs" follows and here we find the band stepping off the gas and displaying their psychedelic chops with gentle guitar arpeggios ringing over liquid bass lines and restrained percussion while voices tells us, in detached tones, of dark memories probably best forgotten. Next track "Slow" has a bluesy almost classic rock feel, its vocals, delivered in a weary baritone over a relaxed mid tempo groove, have a warm seductive feel only really taking off into harsher territories when the song breaks into its repeated chorus. "Good Behavior" defies its title by erupting into an in your face fest of raucous fuzzed out guitar riffage and thundering rhythms decorated in aggressive vocals while next track "Thammuz" finds the band plunging into a lysergic laced doomic instrumental replete with scorching off kilter guitar solos swooping and swirling over and around a backdrop of growling bass and pummeling percussion. "Absolution". although boasting a very doomic title, finds Thammuz heading once again back into desert rock territory, the song reviving the classic rock stance they took on "Slow" but this time swapping those bluesy elements for a more hard rock dynamic. Penultimate track "Fake It" mixes its punk with its stoner to create a cocktail of punkish swagger and hard rock bluster that wouldn't have sounded out of place if it had been accidently included on a compilation of grooves documenting an early 90's Palm Desert generator party. Thammuz finally bring things to a close with "Wizard Sleeve" an instrumental that weaves all the threads of Thammuz's styles, influences and musical preferences together in a stunning musical tapestry of deliciously eclectic groove. 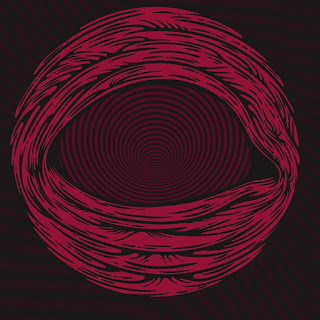 As we said in our opening piece to this review Dutch bands always bring something a little extra to the party and in Thammuz's case that something extra can be found in the diversity of the bands musical attack. Thammuz are a band who can take you by the hand and dance you down long dusty desert highways, they can evoke nightmares with their dank doomic dirges, they can take you on psychedelic journey's into the cosmos and they can rip your face off with their aggressive punk-like ferocity, the fact that they can do all this while still retaining their own signature sound is not only impressive ...it's damn mind-blowing!
Check 'em out ...
© 2020 Frazer Jones
Posted by Desert Psychlist at 02:52