This is the first time Desert Psychlist has reviewed an album from Colombia and hopefully it will not be the last, unfortunately there is not much information to be found concerning the "underground" rock scene in Colombia so we are flying a little blind in regards to reporting on how healthy the scene is over there. We can however point you in the direction of the one Colombian band we do know of, a trio from Bogotá going by the name Surtidora de Ratas. whose instrumental jams are infused with elements of doom, punk and stoner/hard rock but could probably be better summed up as heavy psych. The band have been busy lately releasing two albums, "Siniestros, orgias y gozos en el año de la rata" and "Plegarias para embriagar las ánimas de las ratas", within days of each other, both albums are worthy of attention but for purposes of space and time we will concentrate on the latter. 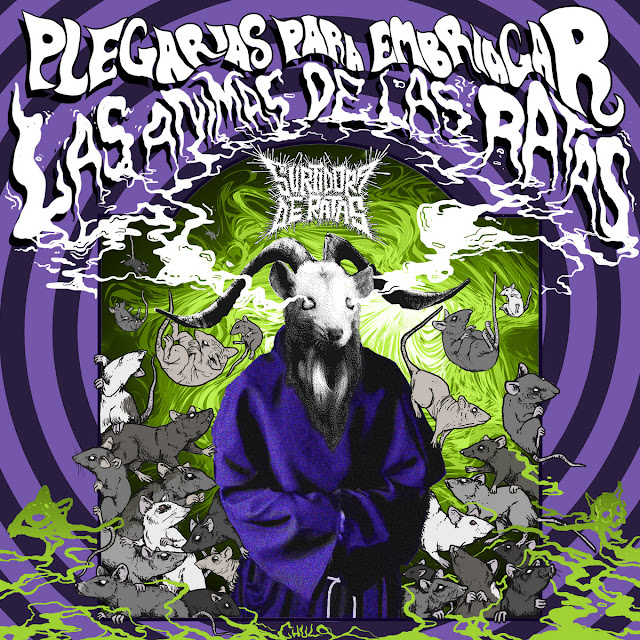 Of all the instrumental bands out there it could be said that Surtidora de Ratas' sonic attack is probably closer in sound to that of Clouds Taste Satanic, than it is to say a band like Iglesia Atomica or Comacozer, in that it has a harder more darker doomic dynamic. This is not to say that the Colombian band do not take off on similar tangents into the cosmos just that when they do they tend to avoid the tourist traps and instead explore the danker murkier backstreets. Take first track "Útero lisérgico" for instance, you get a barrage of heavily distorted guitar, driven by thrumming bass and superbly delivered percussion, going around in what seems like endless circles but whereas another band might layer this all with endless screeching guitar solo's Surtidora de Ratas keep things low key and dark, those solo's are there but they are pushed a little further back in the mix so that instead of overpowering the songs groove they add texture to it. This darker dynamic runs through all ten of the tracks of "Plegarias para embriagar las ánimas de las ratas" with songs like "El valle de las prostitutas", "Reencarnación en año bisiesto" and "El fuego camina conmigo" all sharing a modicum of gritty gravitas, but  Surtidora de Ratas are not a band who are content just to wade in dark waters they are also just as able to get reflective and bluesy ("Acid devil invocation party") as they are to get a little punky and lysergic ("Reencarnación en año bisiesto") both of which they do very well indeed.

The concept behind "Plegarias para embriagar las ánimas de las ratas", and for that matter its sister album "Siniestros, orgias y gozos en el año de la rata", is that of a musical interpretation of the darker side of urban life, a series of sonic snapshots of those parts of a city we know exist but try not to acknowledge or just simply ignore and as concepts go we think it works pretty well.
Check it out ....

Posted by Desert Psychlist at 18:22