The South American continent is fast becoming a main hub for good "underground" rock music, so much so that it is becoming increasingly hard to keep up with the almost constant influx of recommendations, review requests and promo's from South American bands that hit Desert Psychlist's desk on what seems to be (now) a daily basis. Chile is one of those countries at the forefront of this new wave of South American metal and rock and today we bring you an album from a band, who it could be argued, are one of Chile's finest
Dixie Goat, Nikk (vocals/guitars); KF (bass) and Seb (drums), are a trio from Santiago who have, through a mixture of sheer hard work, determination and killer grooves, managed to break through that glass ceiling, separating the Latin American scene from that of the Rest of the World, to gain respect not only from listeners on their own continent but also internationally. If your not familiar with Dixie Goat and are wondering why you should be bothering listening to music from a band situated at the ass end of the Southern Hemisphere well then wrapping your ears around the bands new album "There's No Light Without Darkness" will explain all! 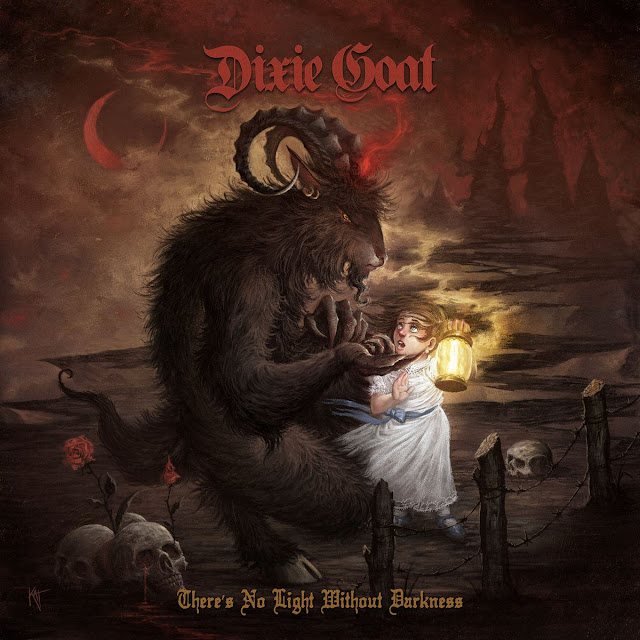 Fellow Doom Charts contributor, Bandcamp surfer and self confessed music junkie Bucky Brown made a comment, on Dixie Goat's Bandcamp page, that the bands latest opus reminded him very much of Pepper Keenan era Corrosion of Conformity, that is a comparison not too wide of its mark. There is a depth of sound and intensity to the songs to be found on "There's No Light Without Darkness" that mirrors COC's thrumming sonic assault, thick low slung guitar riffs and swirling solos, thunderous growling bass lines and industrious percussion all topped of with clean but gritty vocal tones. What separates Dixie Goat from their North Carolina counterparts however is the bands penchant for dipping their toes in waters of a more doomier nature. Opening title track "There's No Light Without Darkness" is the perfect example of Dixie Goat's tendency for wading in pools of darkness, its glutinous circular riff underscored by grizzled bass and a steady but punishing drumming has an ominous vibe that is probably closer to the grooves Pepper Keenan's other band Down were exploring on their last series of EP releases. "Dancing On Your Grave" is up next and here we find the band getting a little more up-tempo and strident with just the occasional lapses into a more doomic dynamic with the vocals following a similar pattern. "Two Faces" and its following track "Widow's Tear" see the band playing two sides of the doomic coin with the former finding the band taking a more proto-metal approach to the genre and the latter adding a little bluesy swagger into the doomic mix. "Green Karma" follows and here the band don their stoner/hard rock caps to kick out the jams on a blustering four to the floor rocker. Next track "Zuma" stays within the stoner canon but this time levels up by adding a little extra metallic bite. Penultimate track "Supershit" seems a little like a throw away track, fun but not essential while closer "From One Hell To Another" is everything you could hope for in a doomic tome, it is atmospheric, intense and Sabbathesque, its swathes of dark reverberating bass and guitar riffage, driven by powerful drumming, frame a superbly delivered low-key vocal that then makes way for a  "Children of the Grave" like refrain before KF signs the song off with a brief bass solo.
It wasn't until Desert Psychlist  had listened to Dixie Goat's "There's No Light Without Darkness" a few times that we noticed that legendary producer Jack Endino had overseen the mastering on this album, now if that doesn't tell you something about the quality of the music to be found here nothing will, Jack knows his shit!
Check it out .....
© 2020 Frazer Jones
Posted by Desert Psychlist at 00:02