Still get spinal shivers from listening to Kyuss, does hearing Fu Manchu still cause involuntary head bobbing and foot tapping? If the answer to those questions is a resounding yes then its odds on that Holland's Desert Colossus are going to tick all your boxes and push all your relevant buttons. Desert Colossus hit a groove that recalls the early days of the desert rock scene, a time when bands would head out into the sandy wilderness and set up impromptu gigs using old generators as a power source, gigs that would see bands melding everything from punk to prog in one big melting pot of sonic mayhem. Desert Colossus do not so much try to replicate the sound of those first desert pioneers but more try to recreate the "vibe" of that period, to bring that desert sound to whole new audience while at the same time putting their own unique twist on things. The bands last album "Omnibeul" went a long way in achieving that goal and so this year (2020), with the bit between their teeth, the band return with "Eyes and Tongues", a whole new collection of psych tinted desert inspired grooviness for your listening pleasure. 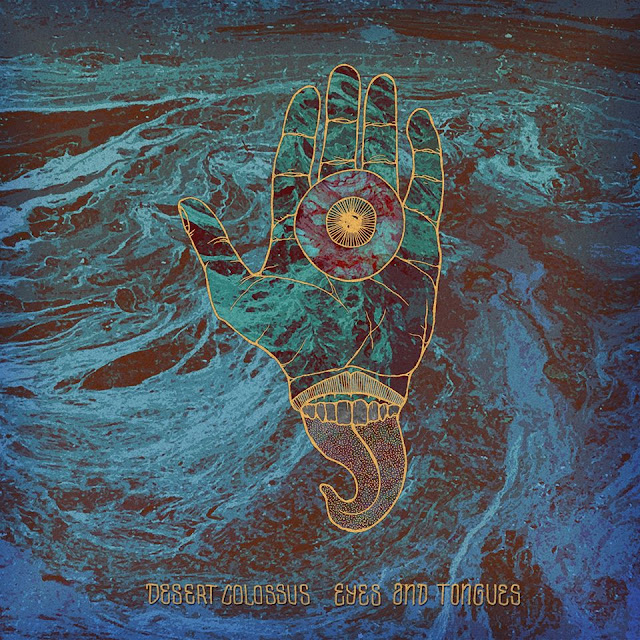 "Eyes and Tongues" contains no crushing disappointments or dismal disasters, from the opening note of the Monster Magnet(ish) "Tear Me Down" to the hollow ringing effect that brings last track "The Final Signs of the End" to a close "Eyes and Tongues" is one triumphant, fist pumping, riff fuelled groove monster. Gloriously raucous and grittily gnarly from start to finish "Eyes and Tongues" is not an album for navel gazers or deep thinkers seeking introspection, this is a joyous, if sometimes shaded, album that needs to be approached not with a heavy heart but with a love of life and a lust for enjoyment, Ok with titles like "Predicament", "Collect Call To Reality", and "Null" you might expect things to be a little negative,downbeat and dank but if there is any dourness in lyrical content it is countered by the upbeat and forceful nature of the grooves that surround them with only the aforementioned "The Final Signs of the End" really dropping into the realms of doomic, it's almost as if the band are saying yes we know we are all going to hell in a handcart but let's at least have some fun on the way. 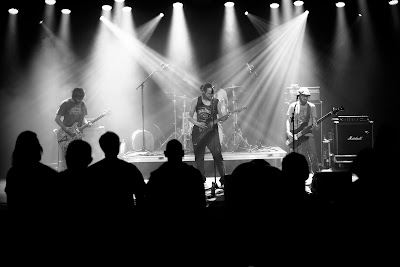 2017's "Omnibeul" saw Desert Colossus edging their foot in the door of international recognition, "Eyes and Tongues" should see them not only walking through that door but smashing the damn thing off its hinges.
Check it out …..