Hard to believe that there was a time when Elder Druid was known only to a few fellow Irish metalheads and a few clued up journo's and bloggers with their fingers on the underground rock scenes pulse. These days the announcement of an upcoming release from these Ballymena bruisers is met with the sort of excitement and anticipation usually reserved for Swedish or American big hitters like Graveyard and Monster Magnet. The reason for this is simple, Elder Druid may operate at the harsher end of the underground spectrum but their grooves have a swing and meter that speaks to rock fans right across the board, their sound being harsh enough to grab the extremists but also diverse enough to appeal to those with more conservative tastes.
The band, Gregg McDowell (vocals); Jake Wallace (guitar); Mikey Scott (guitar); Dale Hughes (bass/keys/Theremin) and Brien Gillen (drums), return this year with their latest opus "Golgotha" (available January 17, 2020) so lets find out if all that anticipation and excitement is justified. 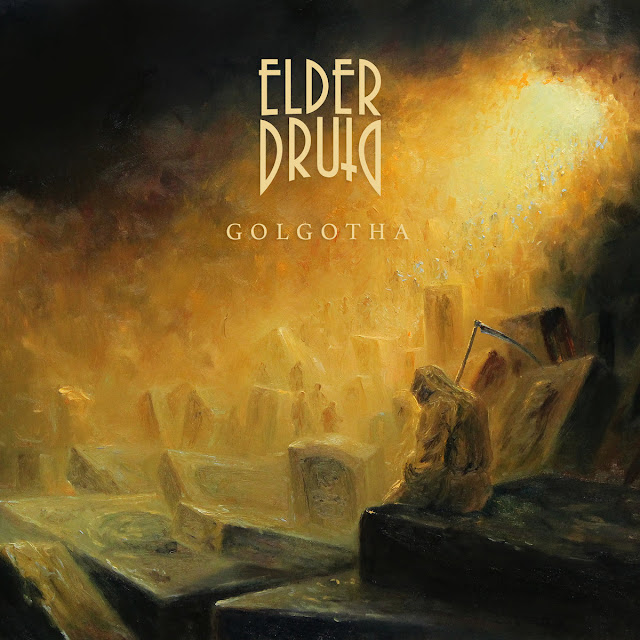 As Desert Psychlist has stated on numerous occasions we are not big fans of harsh, guttural vocals, so why, you must be asking, are we reviewing an album by a band known for those type of vocals. The reason is that although vocalist Gregg McDowell may sound like he is channelling the spirit of some ancient demon through a torn and bleeding larynx the singer can, unlike many with a similar style, actually make himself understood and he brings a clarity to Elder Druids lyrics that might otherwise have been lost had they been sang by anybody else of a similar vocal dynamic. Another reason why Desert Psychlist is reviewing  "Golgotha" is that, vocals aside, Elder Druid are a virtual groove monster who can bludgeon you into submission with the force of their stoner doomic riffs and thunderous sludge rhythms, as they do on tracks like the humungous sounding "Sleeping Giant" and the satanic sounding "Vincere Vel Mori", or can send you spinning through gaping cosmic black holes with their forays into lysergic territory, as can be witnessed on the superb psych/doom instrumental "Sentinel". There is much more musicality to be found on "Golgotha" than can be found on previous Elder Druid releases, one reason for this could be the bands decision to allow bassist Hughes the freedom to run riot with a Fender Rhodes and a Theremin but more likely it is the fact that this is a band who have jammed, rehearsed and gigged together as a unit for many years and, along with an increased prowess in their instrumental ability, have built up an almost telepathic understanding of each others parts in the whole, a whole that just seems to get better and better with every release. 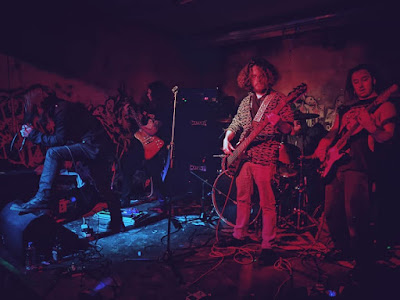 Desert Psychlist has read a lot of album reviews and articles comparing Elder Druid to this or that band, Electric Wizard has been mentioned as have Black Sabbath, The Melvins and Sleep but we can categorically state that when listening to "Golgotha" all Desert Psychlist  can hear is Elder Druid, and that is the biggest compliment we could possibly pay this unique and exciting band.
Check 'em out ….