"Two become one" sang The Spice Girls but in the case of THAL (The Heathens Are Loose) that lyric could well be reversed as THAL was originally a one man project conceived by multi-instrumentalist John "Vince Green" Walker, however when Walker realised that in order to achieve his musical vision he needed a like minded musician to bounce ideas off ,write with and perform with out went a call to fellow multi-instrumentalist and friend Kevin Hartnell, and so "one became two"
This collaboration paid huge dividends when in 2018 THAL released "Reach For The Dragon's Eye" an album that deservedly crept into many of the underground scenes "best of " lists and raised the bands profile to heights they could only of once dreamt of. With any level of success comes expectation, and that can be a burden in itself, but just before 2019's Christmas break the band released "The Harvesting" an album that more than delivers on all its expected promise. 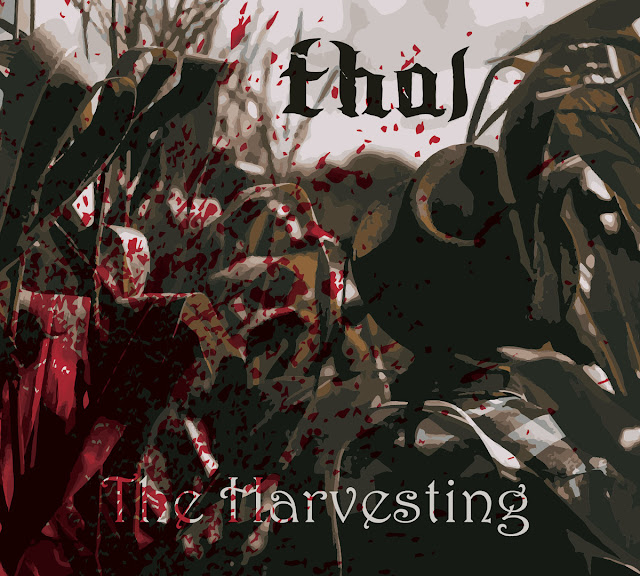 The best albums can conjure up visions in the mind's eye, visions that play out as stories of your own making, this is the case with "The Harvesting". While listening to the nine songs that make up the albums content Desert Psychlist was transported to a world of hardship, conflict and misery in an undefined era that could just as well be medieval Europe as it could be modern day USA. This is the beauty of THAL's music, and especially this album, Walker and Hartnell paint sonic portraits with both their lyrics and their grooves that can take a listener outside of themselves, able to escape the mundane realities of real life and just for a short while mentally escape to places that are dark,dangerous yet exciting. So ok they can tell stories and invoke mental imagery but what do they actually sound like? THAL are heavy but not in a brutal way, the bands grooves sway between doomic and grungy with elements of old school hard rock and metal scattered liberally around to great effect while vocals throughout the album are a mix of clean throaty roars and smooth warm, almost Lynott-esque, croons, both dynamics executed to perfection. It is a sound with the ability to cross genres, a sound just as likely to appeal to the hardened metal extremist as it is to those whose tastes may lean nearer to the mainstream.

Desert Psychlist started this review with a Spice Girl's lyric so it only seems right to finish with one. "The Harvesting" is a superb follow up to "Reach For The Dragon's Eye" that justifies all the expectation that surrounded its release and  if that don't make you want to "slam your body down and wind it all around" then we don't known what will.