It's with a certain amount of shame and embarrassment that Desert Psychlist has to admit that although championing Somerset, UK's Sergeant Thunderhoof since first hearing their 2014 debut "Zigurat" we have somehow never actually reviewed one of their albums. Thankfully we now have the chance to remedy this oversight thanks to the release of their third full length album "Terra Solus" (releases May 12 2018) 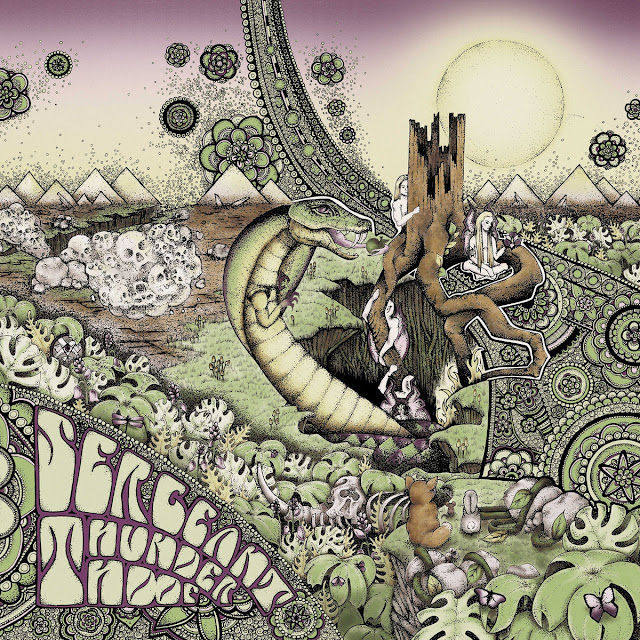 "Another Plane" opens "Terra Solus" and begins with drummer Darren Ashman laying down shimmering percussion around a pulsing bass drum beat accompanied by an eerie drone effect before the hammer goes down and he is joined by Mark Sayer's guitar and Jim Camp's bass in a monstrous chugging hard rock groove. Enter vocalist Dan Flitcroft telling in strong, slightly grizzled tones of "blistered hands" and "cosmic winds" his clean powerful voice and occasional impassioned howl adding an extra level of gravitas to the songs themes of desperation and resignation". "Stella Gate Drive" follows and sees the band hitting into a pelvis thrusting, chest beating hard rock groove touched up with a little glam/sleaze rock'n'roll swagger. Sergeant Thunderhoof ease off the throttle slightly for their next track "The Tree and the Serpent" a song that blends psychedelic colouring and soulful indie rock texturing around a clean, superbly executed vocal melody. This lysergic vibe is carried on into following track "B Oscillation" an instrumental that sees Sayer,Camp and Ashman adding a little rock funkiness to the equation with Sayer's guitar, not so much soaring over Camp's growling bass and Ashman's wall of percussion, but more weaving in and out of them in a myriad of six-string colouring. "Diesel Breath" uses the lyric "take your foot off the gas let's take it slow" but in truth for the majority of the song the band do anything but, coming out of the traps on a raucous wave of heavily fuzzed riffage and insistent rhythms with Flitcroft mixing his vocal attack between clean melodic and grainy rock roar. At around the three quarter mark the groove segues into lysergic territory with Sayer layering shimmering psychedelic hues over and around Camp and Ashman's sympathetic rhythms before the songs initial raucousness returns and takes things to the close. "Priestess of Misery" is up next an atmospheric torch-like opus that soars and swoops on a sea of gnarly doomic riffage and pummelling percussion, Sayer, Camp and Ashman combining to create a dark swirling bedrock of emotive and powerful groove for Flitcroft to decorate with his strong and distinctive vocal tones. "Half A Man" brings things down a notch or two and is a beautiful folk tinted ballad that finds Flitcroft crooning melancholic and melodic over a gentle backdrop of acoustic colouring. The band close proceedings with "Om Shaantih" a song that is part devotional, part lysergic and wholly stunning, a song that blends eastern themes and motifs with those of a more western nature without once compromising on groove, a song that that says, in a shower of bright psychedelic hues, that there is nothing this band can't attempt and there is nothing they can't pull off. 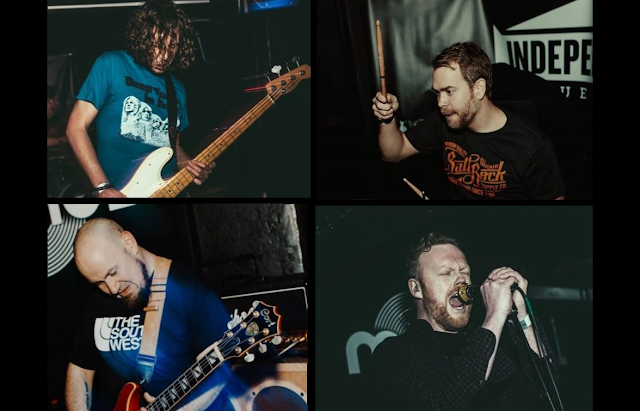 Class is the first syllable of the word "classic" and classic is the first word of the term "classic rock" and what Sergeant Thunderhoof deliver with "Terra Solus" is some damn fine class classic rock. Desert Psychlist supposes there will be those who find the term "classic rock" a touch derogatory for a band who many consider as being an underground hard/stoner rock band but we are using the term not as a genre description but as an observation of the quality of musicianship and songwriting to be found within the grooves of Sergeant Thunderhoof's latest offering and in that respect "Terra Solus" can truly be described as "classic"
Check it out ....