RIPPLES OF THE MIND ~ THE RIPPLE FAMILY .... review

Let's get things clear from the start and tell you that "Ripples of the Mind" is a compilation album and that The Ripple Family are not actually a band, well that last piece is not entirely true as The Ripple Family are a band but not in the traditional  musical sense of the word. To explain this Desert Psychlist needs to tell you a little about the label behind this compilation and how this release came into being.
Todd Severin, main man/head honcho at Ripple Music is a man who cares about music and in particular hard rock but he is also a bit of rare commodity in the music biz because Todd not only cares about the bands and musicians that make the music he loves but he also cares about those that buy it. In fact with Ripple's excellent subscription service, Todd has made it easier and cheaper for fans/followers to afford everything Ripple releases, and they release a lot. Alongside his work with the label Todd has also made it part of his remit to have a connection with his customers/followers via the labels excellent blogspot  "The Ripple Effect" and Facebook forum "Waveriders Unite", it was a post on this last one that started the whole "Ripples of the Mind" ball rolling. When it was suggested to Todd that he should compile a release comprised of the more lysergic orientated songs from the labels roster of artists he didn't scroll past or dismiss the suggestion with a flippant comment, no he turned the whole thing back around and asked the "Waveriders" to choose what should go on the compilation and that he would then release the results.
So here it is a stunning collection of psychedelic performances, lysergic laments and tripped out tunes chosen by a "band" of like minded brothers and sisters and performed by a "band" of  Ripple artists. 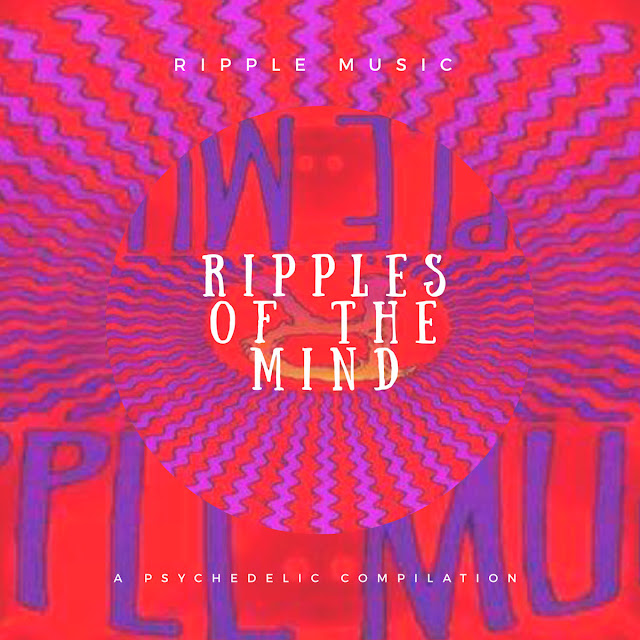 Here's just a sample of what to expect from "Ripples of the Mind".....