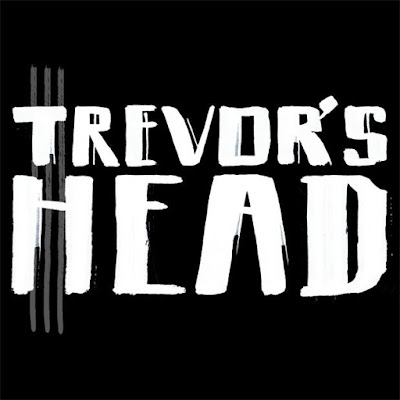 Surrey is a county just outside London, a county that has spawned such legends as Jimmy Page, Eric Clapton and Jeff Beck, a county that can now boast among it's many musical luminaries three guys who play a form of rock that although is rooted in stoner rock, grunge and punk is not defined by those influences, three guys who collectively go by the name of Trevor's Head. 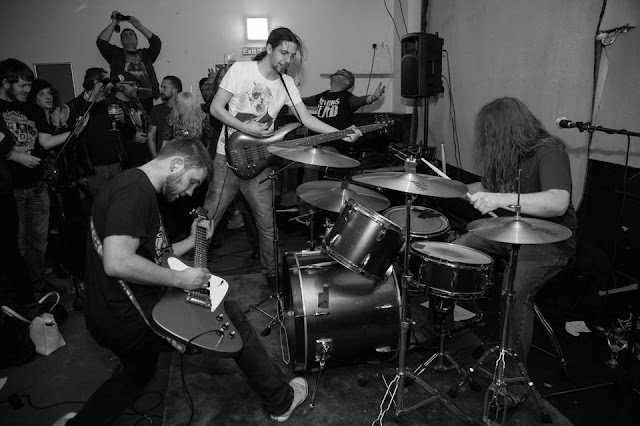 Trevor's Head were formed in 2010 in Redhill, Surrey England and have to date released one full album "Trevor's Head (2012), and two EP's "Juice" (2014) and "Otherside (2014). Over the years there have been a few comings and goings regarding the line up but the bands new album "Tricolossus" was recorded as a trio comprising of Roger Atkins - guitar and vocals,  Matt Ainsworth - drums, flute, synthesizer and vocals and Aaron Strachan - bass, acoustic guitar, organ and vocals. 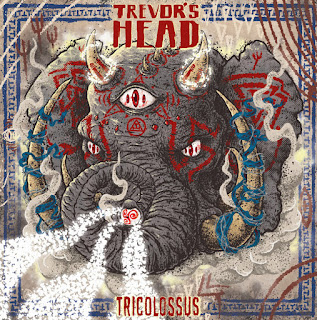 "Blood Moon" kicks things off with a delicious slice of desert grooviness that although pledges its allegiance towards the sand blasted fuzz'n'roll of Kyuss and Queens of the Stone Age also nods its head, in places, towards the more experimental leanings of  Causa Sui and Colour Haze. This is nevermore evident than when, mid-song, the riff heavy intensity drops  away and opens the door for a short but utterly beautiful moment of psychedelic ambiance that is enhanced with some effective use of flute before going back full tilt into the main riff. All this plus a vocal that is crystal clear in tone yet rough enough around the edges as to not be cloying.
The desert/stoner vibe runs thick and true through the whole album but the band are not afraid to throw  a few other genres into the mix. "Idiot Time" and "Roll It Over" see the band get a little hardcore and punky with chainsaw riffage and gritty raw vocals being the weapons of choice while "But A Scratch"  is a strange mix of pop and grunge that has a certain "Englishness" in its quirky off kilter vocal delivery. The band even throw in a curve ball with a  strange little poem "I Had Dreamt I Was Man....."
It is on the more hard/stoner rock tracks though that Trevor's Head really show their true colours especially when they mix it up with a touch of alt/grunge dynamics as in "Pan-Galactic Peacenicks" with its stuttering riff and slightly disjointed rhythms and the absolutely stunning "Ordinary Kind" with its clever use of vocal interplay. Highlight of the album, for me, though is the atmospheric and musically complex "21 Tonnes" its shifts in dynamics and time combined with its weirdly wonderful synthesiser segment taking it into a place a thousand light years away from the gentle intro of the songs origin.
The album ends with a superb mix of English indie whimsy and American desert grit on the delightfully eclectic ""Casa De Eduardo" a song that matches Ray Davies (Kinks) like observational  storytelling against a backdrop of fuzz and distortion and is very reminiscent in style to now defunct UK band The Members, who incidentally were also from Surrey!

"Tricolossus" is a diverse and quite brilliant album from a band unwilling to stay confined within the boundaries of a specific genre or sound and who in making this stance have created their own genre and sound. Get inside Trevor's Head it's a great place to be!