Sludge has never really been my thing I have always been more of a stoner/hard rock man but every now and then a band will come along that will blow away my misconceptions and make me rethink. Boss Keloid are one such band 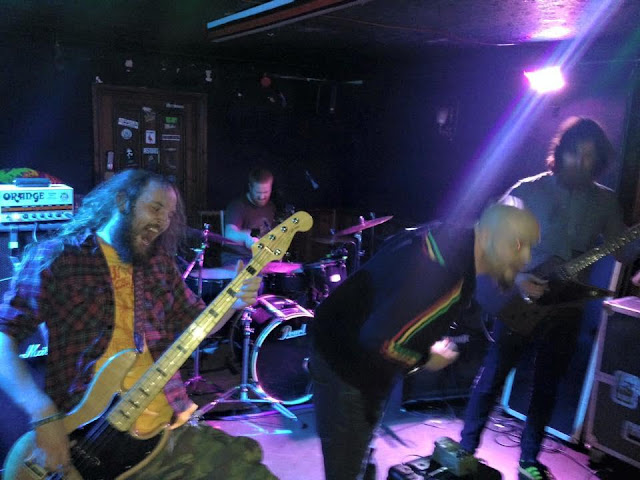 The quartet of Paul Swarbrick ~ Guitars, Ste Arands ~ Drums, Adam Swarbrick ~ Bass  and Alex Hurst ~ Vocals  are about to release their second album "Herb Your Enthusiasm" on Black Bow records on April 8. 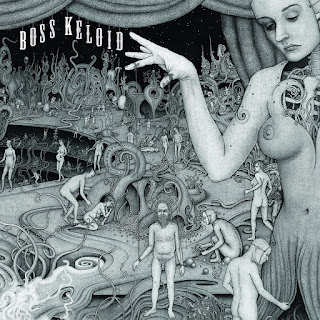 So what do you get for your hard earned cash? Well for starters you get a sterling production courtesy of Conan bassist Chris Fielding, sludge can often suffer from muddy sounding production but Fielding manages to get a crisp, clear sound down on tape without losing any of the heaviness and rumbling bottom end that is so vital to music in this genre. Especially pleasing is the way Hurst's vocals appear in the mix, his raw edged rumbling bellow sits perfectly within the musical soundscape with every syllable clear and concise. Musically Boss Keloid are a monster, whether churning out thick syrupy riffs or laying out on gentler psychedelic coloured passages the bands levels of musical skill never falter. The bass and guitar pairing of Adam and Paul Swarbrick compliment each other perfectly while Arands fills everything with brutal and complex rhythmic percussion. Boss Keloid are not just about the heavy though, there are, among the ten songs that make up this album, moments of psych ambiance and prog like complexity that show a band who are unafraid to step outside of the box . This band know how to construct a song, injecting moments of light and shade within the brutality, building up atmospheres, taking listeners to the edges of places they might not want to go to then bringing them back just before tipping over into the abyss. Comparisons have been made with USA's Mastodon and in some respects this can be understood, both bands weave instrumental virtuosity around primal heaviness but there are also elements of post-rock's  A Storm of Light within Boss Keloids sonic cannon, especially on the albums more psychedelic moments. Either way you look at it Boss Keloid are a band who are quite capable of standing shoulder to shoulder with both those iconic bands and in "Herb Your Enthusiasm " have made an album to prove that fact.


I used "sludge" as a description for the music Boss Keloid create in my intro to this review but after listening a few times to this album I am not sure if that tag is appropriate, There is so much more going on here than can be described in one word. Check it out for yourselves and see if you can, or even want to stick what you hear into some neat little labelled box.

Posted by Desert Psychlist at 18:02