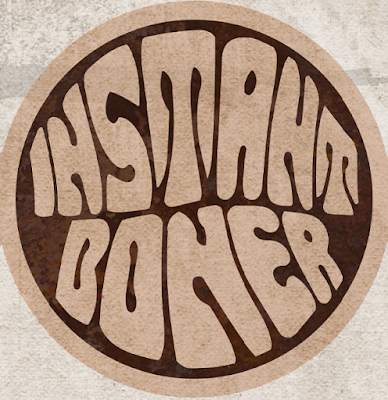 Six members in a band must cause all sorts of headaches when touring, first off you gonna need a bigger van, next your gonna struggle to get everybody on stage at smaller venues and last and most importantly your gonna have to split any money you do eventually make six ways!
This is a problem that Greek stonernauts Instant Boner have to deal with all the time.
Instant Boner were formed in 2013 in Thessaloniki, Greece and have gigged with such underground luminaries as Samsara Blues Experiment and Radio Moscow as well as sharing stages with fellow Greek stoners Nightstalker and 1000 Mods. The band ..Dafy- Guitar, Johnny- Bass, Kostas- Vocals, Orestis- Saxophone, Paris- Guitar and Vaggelis- Drums. released their debut EP "Perfect Sunday" in 2014 to good reviews and have now followed the promise that debut showed by releasing their new EP " Outburst" 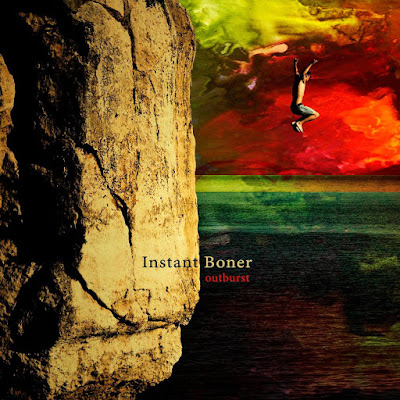 "Outburst" is an EP quite capable of pinning you to the wall with massive chainsaw riffs and thunderous rhythm as can be found on opener "Messiah" and title track "Outburst" but it is also as capable of smoothing your furrowed brow with gentle moody jazz as on the beautifully smooth "Falling Stars" or getting all psychedelic and blue as on the deliciously eclectic "Lady Sin" What sets Instant Boner apart from their peers, aside from the fact they have a saxophonist among their ranks, is the diversity of  moods, grooves and feels within these songs. "Messiah" rocks hard but it also swings, modal jazz shapes and psychedelic colouring weave in and around fuzzy guitars and gritty vocals creating a landscape of  differing textures, an effect that is slightly schizophrenic but at the same time quite brilliant. "Outburst", the EP's only (original) real out and out stoner rock tune, does not escape this treatment either, it's heavy distorted riffage and powerhouse rhythms are offset against swirling effects and punctuated by stunning sax solo's. "Falling Stars" as mentioned previously is a smooth  jazzy, slightly funky number with  smokey sax and echo laden guitars wending themselves around a crooned weary vocal  underpinned by creamy bass and intricate percussion, it's a real curveball but one that works really well. "Lady Sin" channels the spirit  vocally of one Mr Don Glen Vliet, or as he was better known Captain Beefheart, in an atmospheric and quite stunning swampy, blues drenched torch song that meshes Dick Dale sounding guitar licks with a little Dixieland swing before taking flight into a balls to the wall fuzzy stoner riff fest in the songs last quarter. The band throw in a cover to bring things to a close and it's an inspired choice. Rumour has it that Jimi Hendrix was, before his untimely death, talking about moving more into a jazzy more improvisational phase, so it seems quite fitting that a band who like to do the same within the stoner/psych field should decide to record one of his tunes, the tune they chose ...."Foxy Lady". It's not a radical departure from the original but does contain a nice psych soaked bridge and the harder edged full on stonerized treatment given to the last half of the song really gives it an edge. I think Jimi would of approved!

Instant Boner are not your typical stoner/hard rock band, the six guys who make up this band like to mix it up a little, throw in a few surprises. What they do they do extremely well and I for one cannot wait to see where they take this music next. See what you think....

Posted by Desert Psychlist at 11:10