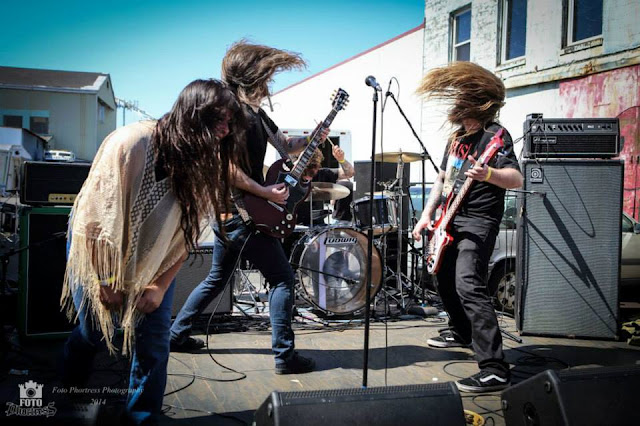 It seemed like Holy Grove were going to be one of those bands that everyone knew about but only a few  outside of their hometown actually got to hear. The band from Portland, Oregon had been treading the boards supporting bands as well as headlining their own gigs since forming in 2012 and in that same year released a four song demo (no longer available) on Bandcamp, they then followed this up with a short live two song affair Live at Jooniers in 2014, a move that garnered positive reviews and brought them to the attention of interested record companies. The band, Andrea Vidal - Vocals, Trent Jacobs - Guitar, Gregg Emley - Bass and Adam Jelsing - Drums, were eventually picked up by HEAVY PSYCH SOUNDS and this year released their debut self-titled album Holy Grove. 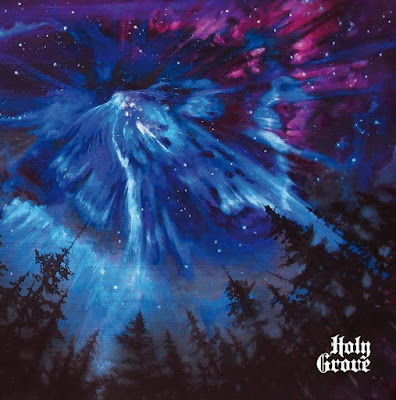 For those that are familiar with Holy Grove's past output will also be familiar with at least three of the tracks on the album, "Nix", "Holy Grove" and "Huntress" have all appeared in one form or another on the bands previous efforts. Here though the songs have been polished, re-worked and re-imagined, and of these three tracks it is, in my opinion, "Huntress" that benefits the most from this treatment. Darker and more intense than it's demo version it is falls into epic territory here. Jelsing's drums that ,on the demo, were up in your face have been tamed somewhat, laying a little further back in the mix allowing Emley's bass to stand a little further out thus solidifying and equalising the bands rhythmic base. Title track "Holy Grove" differs from its original by sounding almost creamy in comparison with Emley's bass syncing perfectly with Jacob's guitar, laying back when Jacob's unleashes one of his scorching solo's and pushing and driving with him on the meaty riffs. On "Nix" the band opt for a whole different guitar tone, one that, like "Huntress", makes the song sound deeper, darker with a doomier atmospheric. The newer songs stand up well against the older ones with opener "Death of Magic" being the perfect example with its mix of heavy riffs and catchy hooks that are pushed from beneath by Jelsing's furious and industrious drumming. Jacobs lays down a spine tingling solo that is as emotive as it is technical and this combined with Emley's bass ensures that this album begins with a bang!  "Caravan" rolls along on a slightly Sabbathian groove and sees Jelsing and Emley locking in tighter than a Scotsman's fist beneath Jacob's fuzz drenched riffs and licks. "Hanged Man" has the sort of epic doom feel that was/is associated with the likes of Candlemass and Solitude Aeturnus, massive, grandiose and dark. "Safe Return" closes the album and continues in much the same vein as the previous track but this time adds into the mix a little bluesy colouring as well as a little loud/quiet/loud dynamics.
Many of you may of noticed that thus far I have omitted to make any mention towards the vocal component of the albums songs and the reason for this is they deserve a section all to themselves!
Every band should have something/someone that stands them out from the crowd, gives them an edge, a focal point and Holy Grove have a veritable peach in that department. Andrea Vidal owns one of those voices that once heard will never be forgotten, possessing a depth of tone that resonates with passionate power and emotion. She pitches her vocals perfectly throughout the albums seven songs, applying a dark bluesy grit over and around the musical soundscapes surrounding her, filling the spaces with wonderful phrasing and delivery, complimenting the songs arrangements with something not usually mentioned in underground rock circles....soul! Vidal's voice combined with the exceptional musicianship of Jacobs, Emley and Jelsing ensures this will be an album fans of the occult/doom genre will be coming back to time and time again

Holy Grove is a stunning album from a band who have built a following  by sticking to their principles, working hard and believing in themselves, check it out....

Posted by Desert Psychlist at 13:24