Greece has been going through some bad times lately,along with their well documented financial crisis, the Greeks have also found themselves on the front line regarding the massive migrant influx of refugee's attempting to escape the conflict in the Middle East. History has shown us though that when times get bad the music seems to get better and in the case of the Greek stoner/hard rock scene things have never been so good. The latest addition to the long list of excellent stoner, hard rock and psych bands currently coming out Greece are Athenian hard rockers The Mound! 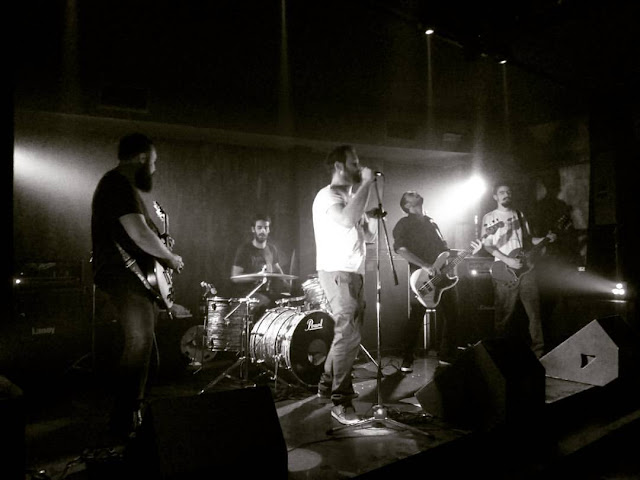 The Mound are Argiris Drokalos - Vocals, Epameinondas Koutsoumpas - Guitars, George... Papoulis - Guitars, Petros Zervas - Bass Guitar and Nikos Koutantos- Drums, Percussion,  and were formed in Athens, Greece in 2012  starting out ,as many bands do, by covering other artists material, It was when Nikos Koutantos joined (replacing original drummer Kostas Peroukidis) that the band started getting serious and  began writing their own material, a move that has culminated in the release of this  The Mound's debut EP "Mound". 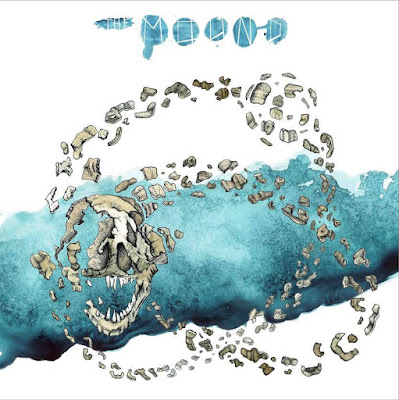 "Eye For An Eye" starts things rolling with a totally breathtaking opener. A guitar feeds back in howling anguish and is then joined by a second guitar that adds  echoey staccato stabbed chords to the mix before both guitars fall into the  deliciously dark main riff. Beneath this the engine room of bass and drums supply a steady stream of rolling thunder, driving the riff with powerful percussive muscle and bone shaking bottom end. Over a minute and fifteen seconds into the song, and heralded with a moment of wonderous psych drenched ambience, the vocals arrive. Gritty powerful and full on  Drokalos delivers his lines with impeccable tone and phrasing taking the rather sparse, simple lyrics and making them sound somehow deeper and more meaningful.The song ends as it began with  wailing feedback taking the song into the fade.
"Mound" is up next and is again is introduced with howling feedback before kicking into the stuttering, circular riff that is the songs foundation.Vocals are a little more aggressive here, a little more throaty and forceful, when Drokalos sings "Like a bullet through my mind" you can almost feel the pain he is describing.At around the 3:00 min. mark the dynamic shifts from the stonerized hard rock rhythms of the songs beginning into a more atmospheric bluesy groove that sees Koutsoumpas and Papoulis trading off , one laying down the fuzz drenched riffage while the other soars and swoops around it with scintillatingly hot guitar solo's The pair then combine to take the groove back to its initial root with Zervas and Koutantos going hell for leather underneath and Drokalos roaring the songs chorus above them. It's breathtaking!
"Snake In A Cradle" drops the tempo slightly, but loses none of the intensity that exists in the previous two songs, in fact the darker edged doomier meter employed here actually ramps that intensity up a notch or two. Drokalos' voice takes on a wearier more lived in edge on the first two verses, a tone that perfectly suit the songs darker vibe only reverting to his trademark roar when the groove moves into a more stoner doom tempo in the songs last quarter. Once again the musicians behind the voice give nothing but 110%, pulling together to create a wall of sound that raises the hairs on the back of the neck and sends shivers down the spine. Guitars wail and thrash, the drums crash and pound and the bass thunders and booms, all combining for the song yet  showing their individual  instrumental prowess within that structure.
"Walk" closes the EP and sees the band jamming to a more straight-ahead stoner groove that has a touch of ,fellow Greek stoners, Planet of Zeus in its sonic cannon. Uptempo and with just a hint of southern swagger within its veins this rocks and rolls along nicely with searing  guitar solo's and chainsaw riffage, pushed along by a furious rhythmic backdrop of bass and drum and overlayed with a throat ripping vocal performance. 3:38 long this kicks serious butt from the opening chord to it's abrupt finale.

If your familiar with the Greek stoner/hard rock scene and dig the likes of Planet of Zeus, Out Of The Earth and Godsleep but long for a band who combine elements of all three within their sound then check out The Mound, I guarantee you will like what you hear.....

Posted by Desert Psychlist at 08:40