Given the countries recent emergence as a major player in the stoner/doom rock scene it was not going to be very long before I was back reviewing yet another Brazilian band within these pages. 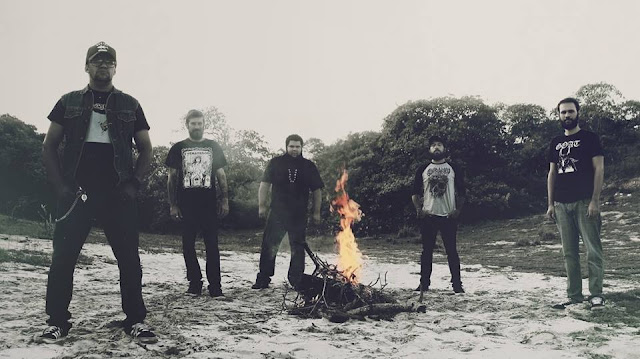 Son Of A Witch hail from Natal, in north-eastern, Brazil and at the time of recording (there have since been a few line up changes)  the band were King Lizzard (vocals), Space Ghost (guitar), Gila Monster (guitar), Bong Monkey (bass) and Asteroid Mammoth (drums). In 2011 the band released a self titled EP of gnarly stoner doom that prompted me to write this short review on their Bandcamp page..."Dark,doomy riffage,strong ,raw but clean vocals make this a must have for fans of stoner doom metal. Can't wait for a full album!"
Well it has been almost four years since I wrote those words and finally that full album has arrived in the shape of "Thrones In The Sky". 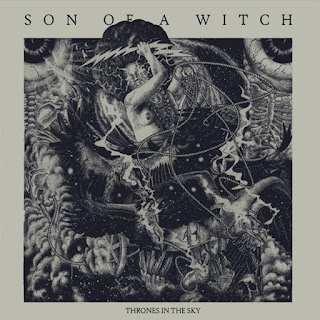 Title track "Thrones In The Sky" opens the album with a ferocious statement of intent, guitars, drums and bass all combining in a huge wall of  distorted riffage and rhythmic muscle. The song explodes straight out of the speakers with a Sabbath-esque groove before everything drops down to a single filthy guitar laying down a fuzzed out stoner riff that is so dirty you will need a shower after hearing it and that is then joined, after a couple of bars, by  the rest of the band. King Lizzard adds to this glorious mayhem with clean, melodic but raw edged vocals that bring to mind memories of Egypt's Aaron Esterby in his earlier, less throaty days.  10:23 seconds is a long time if your waiting for a train or bus but they fly by when listening to music this good!
"Alpha Omega Astra" is up next, it's doom laden riff swirling around like a condor on a warm updraft before, like the previous track, it shifts gear into a more stoner metal groove. Bong Monkey and Asteroid Mammoth (I love these names) lay down a thunderous rhythmic backdrop for the two guitars to riff over, the Ghost and the Monster employing humongous amounts of fuzz and distortion, complimenting each other in a wonderful amalgamation of power and tone. King Lizzard lays down a storming vocal throughout but it is at just over the seven minute mark, when the songs dynamic shifts into a slightly dreamy psych groove, that you get to hear another side to the man's vocal prowess. Low melodic and without a hint of the rasp so effective on the rest of the song he adds a warm hazy lysergic tone to the proceedings that is really quite unexpected but totally delicious.
"Far Away From Dreaming (Giant Spheres and Humanoids)" sees the band jamming a Pentagram/Sabbath groove that carries at it's core a little of the bluesy swagger that those two iconic bands used to such good effect, it is not obvious but it IS there nestled among the strong rhythms and heavy downtuned riffs. Add to this the King Lizzard's superb vocal and the excellent guitar work of both Space Ghost and Gila Monster and you have a track that is as atmospheric as it is heavy.
"New Monster" is exactly that "a monster"! Riff heavy and filled with more hooks than a school cloakroom, it rolls along on a rollercoaster ride through subtle changes of time and dynamics and is superbly embellished with scintillating solos and licks as well as full on raw powerful vocals and rhythms.
"Jupiter Cosmonaut" closes the album in epic style and sees the band mixing it up with elements of psych and space rock thrown in amongst the doomy heaviness. King Lizzard's echo laden vocals reverberate against a backdrop pulverising percussion and rumbling bass. Wah drenched guitar solo's wend their way in and out of a maelstrom that builds in intensity until collapsing under its own weight allowing a brief respite where Bong Monkey and Asteroid Mammoth fill the void with gnarly bass and shimmering percussion before it all takes flight again with a doom drenched riff taking it to the close. This could be the best 15 minutes 38 seconds of your life!

Son Of A Witch obviously don't do things in a hurry, four years is a long time between releases, but when that four year wait produces something as good as "Thrones In The Sky"...well it all seems worth while!
Check it out for yourselves....

Posted by Desert Psychlist at 07:50