Quality underground rock music seems to be flowing out of Brazil like the waters of its infamous Amazon River flow into the sea with Pesta, Son Of A Witch and Gods & Punks just some of the bands making their presences felt around the world. One band at the forefront of this Brazilian invasion are Piracicaba quartet Spiral Guru, the band have been drip feeding their brand of spacey occult-ish psych rock on to the international market since 2014 via a series of enthralling sci-fi themed EP's and now the quartet have released their first full length album "Void" 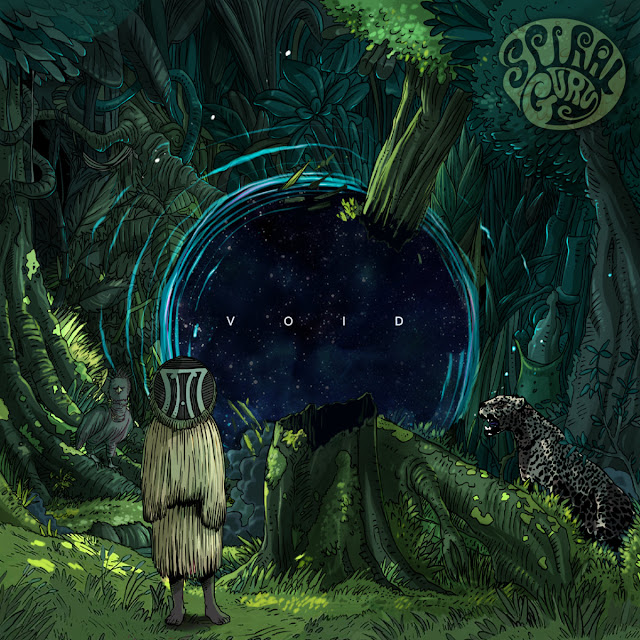 So what do you get when you place the needle, laser, or whatever it is that drives a digital playback onto Spiral Guru's latest release? Well the answer to that is you get three exceptional musicians, Samuel Pedrosa (guitars), José Ribeiro Jr. (bass and backing vocals) and Alexandre Garcia (drums), laying down dark ,but not foreboding, prog tinted proto-doomic grooves around the slightly folkish and ethereal tones of an equally exceptional vocalist, Andrea Ruocco. Now you could say that this has all been done before, and we would have to say yes it has, but never in quite the same way. There is a stark and startling contrast between Ruocco's sweet folk tones and the grooves that surround them, a contrast that on paper shouldn't work but sonically ultimately does, and it is this contrast of light and dark that is both the albums biggest selling point and its greatest asset. Ruocco's vocals are crisp, clean and clear her haunting sweet  tones channel the spirits of such folk rock greats as Sandy Denny (Fairport Convention) and Annie Haslam (Renaissance) as well as those of her fellow countrywoman Flora Plurim (jazz chartreuse who worked with jazz giants Chick Corea and Stan Getz), her voice floating and soaring above the cacophonies of dark groove laid beneath her like a delicate butterfly flitting majestically over thorny bushes. This juxtaposition of heaviness and delicacy informs most of "Void" but is most prevalent on songs like "The Curfew At Dusk" and "Time Traveller", Pedrosa, Ribeiro Jr. and Garcia tearing up the ground with thundering percussion, grumbling bass, crunching riffs and swirling solo's while Ruocco wails waif like overhead, it is however when band and vocalist pull things back a little that things get really magical as on the beautiful "Mindfulness" and the exquisite "Showcase of Dreams", the band fusing opposing dynamics together to make one awe-inspiring whole. 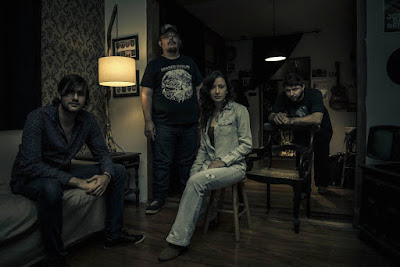 "Fusion", in musical terms, was/is a word oft associated with  jazz music blended with other musical styles but given one of the words definitions, "the merging of different elements into a union" , why then can't we apply that word to what Spiral Guru do? Elements of space, doom, metal and psych merged with folk like lead vocal tones and duel harmonies sounds like a "fusion" to these ears, in which case "Void" is the damn best "fusion" album we have heard in a long time!