Someone asked Desert Psychlist recently what the difference was between "psychedelic rock" and that which we call "heavy psych", the best we could come up with was that whereas "psychedelic rock" may conjure up musical visions of tranquil multi-coloured landscapes under day-glo skies "heavy psych" will conjure up those same images but with skies a little darker and broken up by spectacular flashes of lightening accompanied by the low rumbling sound of thunder

Canada's Crazy Bones, a Toronto based heavy psych trio consisting of Cam Alford (bass/vocals), Peter Turik (guitar/vocals) and Simon Kou (drums) , do not only bring that lightning and thunder to the table, with their heavy lysergic grooves, they also throw into the mix a little swampy sludginess and spacey cosmic stardust, something that makes their latest EP "Slime Flux" not only an interesting listen but also a mesmerising one 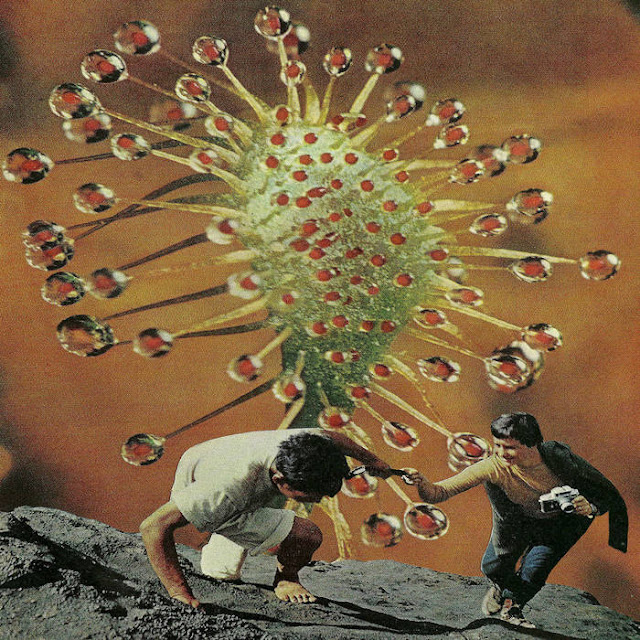 Crazy Bones get the "Slime Flux" ball rolling with "Fruiting Bodies" a song that opens with a fat booming bass line accompanied by shimmering percussion around which a kaleidoscope of lysergic guitar colouring swells an pulsates. The rhythm section then steps it up a notch and clean indie-ish, slightly sneered, vocals enter the fray chanting mantra- like harmonies over a backdrop of swirling swooping guitar solos' and thundering, ever shifting rhythmic groove. "Ring Worm" follows and finds the band mixing their lysergic experimentations with elements of good old fashioned low slow doom and heavy swampy sludge. The band bring proceedings to a close with "Laughing", a song that begins like something from a slightly off kilter 50's teen movie then increases in both dynamics and volume until exploding into a spacey strident groove fest decorated in a heady mix of bluesy psychedelic guitar licks and speed of light shredding.

Weirdly wonderful and wonderfully weird "Slime Flux" is one of those releases that is slightly off-center, slightly skewered a tad twisted but that is its beauty, "Slime Flux" doesn't conform to the norm it is flawed ,it is jagged, it is uncompromising and it is .....frankly quite brilliant because of those things