SON OF A WITCH ~ COMMANDED BY COSMIC FORCES ..... review

Gila Monster (guitar), King Lizzard, (vocals), Psychedelic Monk (guitar), Old Goat (bass) and Asteroid Mammoth (drums) are back, ok that might not mean much to the ordinary man/woman in the street but to those of us with our fingers on the pulse of the Brazilian underground rock scene it marks the return of one of the best doomic bands the South American continent has to offer. The band we are talking about here is Son of a Witch a foursome who first came to Desert Psychlist's attention via their 2012 Ep "Son of a Witch" then grabbed that attention fully with their 2016 debut album "Thrones In The Sky", an enthralling mix of riff heavy proto-doom and crunching hard rock. Last year (2018) the band entered Black Hole Studios in Natal to record new songs for their second album, that album, "Commanded By Cosmic Forces" has just been released (Kozmik Artfactz {vinyl} and Burning London/Deathtime {CD}). 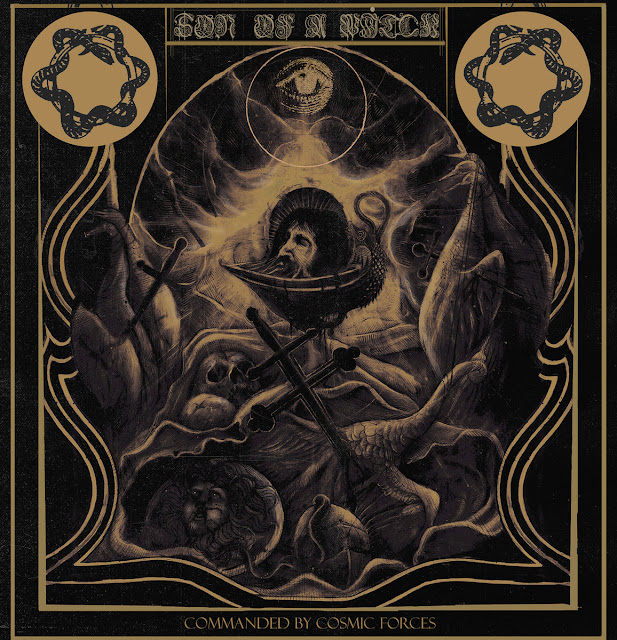 "Commanded By Cosmic Forces" begins life with a customary soundbyte intro, probably lifted from some obscure occult movie, then forges straight into first track proper "Black Clouds of Lies", a track that the band released as a teaser for this album in June of this year. "Black Clouds of Lies" is a song that deals lyrically with the absence of truth and the convictions of our beliefs and is played out against a backdrop of heavy doomic groove that borders between proto and traditional. King Lizzard sings of "defending our truth" and wishing "long life to the sincere of soul and heart" in a voice thick with emotional gravitas, his vocal strong, powerful and just the right side of throaty is pushed hard by the Goat, the Monk, the Monster and the Mammoth, the four oddly named musicians laying down an exceptional array of dark but not overly dank doomic refrains and rhythms."Breathe Dust" follows and finds the band jamming a slightly slower, heavier groove that leans more towards the stoner end of the doom spectrum, the song is solidly anchored down by big booming bass and slow ponderous percussion allowing the two guitarist to express themselves with a mixture of crunching riffage and swirling solos. The song is taken to another level by the slightly off-kilter nature of its vocal melody, the Lizzard man imparting cryptic wisdom in tones that are as warm as they are powerful. Next up is "Idol of Marbles (Commanded By Cosmic Forces)" a song that finds the band stepping out of their doom comfort zone and pushing into more experimental areas, a militaristic drum pattern forming the platform from which the band launch into a hazy lysergic groove over which acoustic and electric guitars vie for supremacy bolstered by a bass line that would not of sounded out of place on an album by British art-rockers Japan. "Dry Leaves" finds the band back in more familiar doomic territory with strong throaty vocals extolling the virtues of wind over a backdrop of thunderous doomic refrains both proto-ic and traditional. "Melting Ocean" brings "Commanded By Cosmic Forces" to a close with a huge throbbing slab of intense psychedelic tinted doom, its heavy crunching grooves decorated with green tinted lyrics that tell of a world slipping into chaos, Lizzard telling us in a mixture of anger and sadness that "we built our houses all out of straw, now the wolf is coming to take us all", it's a song with a thinly veiled political message but one that sadly will probably carry on being ignored nonetheless. 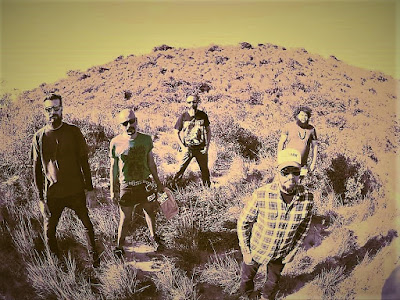 Intelligent, thought provoking doom makes a nice change from the satanic musings usually associated with the genre and much like their fellow Brazilian counterparts, Pesta, Son of a Witch are band unafraid to address themes and issues others might feel are a little too contentious.... and that, combined with their incredibly addictive grooves, is something they should be loudly applauded for.
Check 'em out ...