If you are in a band plying its trade in the stoner, doom or psych genres that band will no doubt have taken some of its influences from the mighty Black Sabbath, this is totally understandable given that the Birmingham Four more or less invented those musical forms. What you don't want to become, especially if you want to move forward with your music, is to be so influenced by that sound that you find yourself becoming a clone of your heroes or worse sounding like a tribute act.
Texas' trio Stone Nomads, Jude Sisk (vocals/bass); Jon Cosky (vocals/guitar) and Dwayne Crosby (drums), readily admit to being influenced by Tony, Ozzy, Geezer and Bill, even going as far as describing themselves as "sons of Sabbath", but their take on doom owes as much to Trouble, as it does Sabbath and let us not ignore the elements of galloping Iron Maiden-flavoured NWOBHM, gnarly Southern sludginess and Texan bluesiness they also shoe-horn into their dank dark and doomic compositions.
The band have just released their debut "Fields of Doom", on Gravitoyd Heavy Music, and Desert Psychlist truly believes its an album you will not want to pass you by. 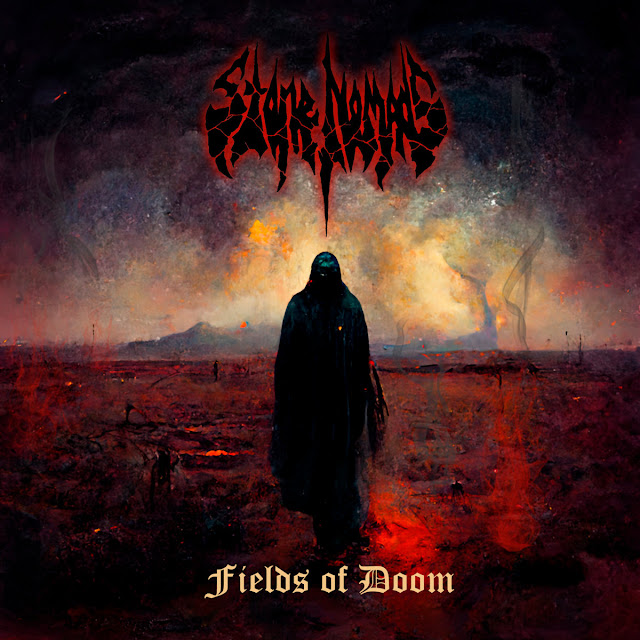 Title track "Fields of Doom" opens Stone Nomads debut opus and in five minutes forty two seconds more or less tells you exactly everything you need to know about what this band bring to the table, i.e. huge rumbling riffs, crushing percussion and big vocals. The main vocal for this particular song is handled by guitarist  Cosky his bear like roar is a real force of nature and his guitar playing, a mix of soaring bluesiness and metallic finger blurring shredding, is just as impressive. "Fiery Sabbath" follows and finds Cosky sharing vocal duties with bassist Sisk, Sisk's slightly cleaner, but just as huge, voice combining with Cosky's growlier tones to create raw and raucous harmonies beneath which, with considerable support from Crosby's drums, they lay down a groove that is constantly transitioning between low slow and heavy and up tempo and strident. "Primitive Rituals" sees Sisk taking the vocal lead with Cosky taking on more of a backing role, the songs groove is a little less undulating than on previous tracks and boasts a more proto-doomic dynamic with Sisk and Crosby locking in together to provide a gnarly mix of growling bottom end and thunderous percussion which Cosky then decorates with crunching power chords and screeching lead work. It's all aboard the good ship ambient for the next track "Winds of Barren Lands" a stunningly beautiful instrumental that sees Stone Nomads proving acoustic guitars can doom too. "Soul Stealer" is up next and is one of those songs that once heard will never be forgotten, a metal torch song that doesn't start out that way but becomes one thanks in part to Sisk and Cosky's emotion drenched vocal performances and Cosky's feel soaked guitar solo's that soar and swoop in and around his and Sisk's impressive vocal interplay, Crosby holding everything together with some seriously impressive drumming. Despite their tongue in cheek "sons of Sabbath" claim it is another iconic doom band that Stone Nomads doff their caps to for their closing number, the band crunching out a cover of St Vitus' "Dragon Time" and making a damn fine job of it too, their version almost eclipsing the original by ramping up the songs intensity to one more than ten and throwing in some seriously mind-blowing lead work. 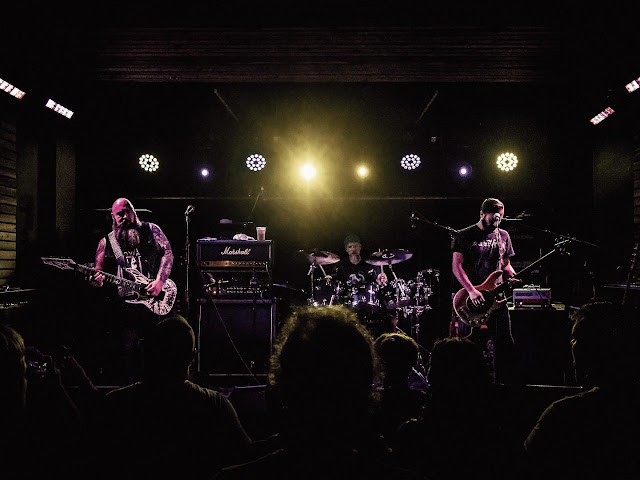 The guys in Stone Nomad have been around the block a few times and paid their dues, they are fully fledged musicians totally at ease in both the studio and on stage who have a command over their respective instruments that comes from years of practice and gigging so do not expect to hear words like "potential" and "promise" banded about regarding their album "Fields of Doom" because this is a band who arrive fully formed and ready to doom straight out of the box.
Check 'em out ......

Posted by Desert Psychlist at 12:00