"Turn up, detune, doom out" is the motto Colorado doomsters Deer Creek live their lives by and it is one that has served them well since their formation in 2002. The band have been no slouches in their time together and as well as paying their dues on the live circuit have accrued quite an impressive back catalogue of quality splits and EP's. Deer Creek, Stephanie Hopper (bass); Conan Hultgren (guitar/vocals); Marc Brooks (drums) and Paul Vismara (guitar/vocals), make no bones about describing what they do as "doom" but the doom they bring to the table is of a type that doesn't quite fit into any of the established doom genres, it is a sound that possess much of the qualities of that which we describe as "stoner-doom", in that many of the bands songs jam a sedate and monolithic dynamic, but there is something in the way Vismara and Hultgren phrase their vocals and in the way the band arrange and structure their songs around those vocals that makes their music seem so much more than just another monotonous riff fest and gives their sound so much more light and shade, as you will find out for yourselves when you check out the bands latest release "Menticide". 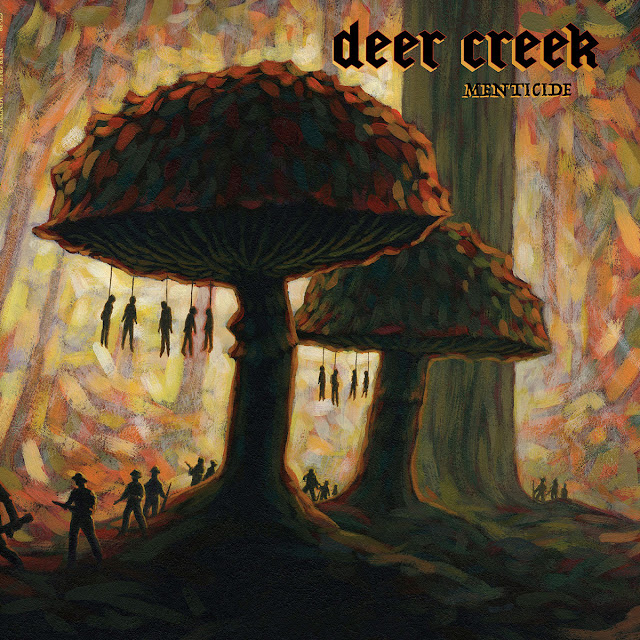 Deer Creek have a history of giving their songs cryptic titles and they open "Menticide" with an absolute beauty, "(It Had Neither Fins Or Wings) Nor Did It Writhe" a song built around a deliciously dank fuzzed out refrain driven by not so much thunderous (though it does have elements of that) but powerful tight and totally effective percussion. The song boasts a clean vocal that sits on the more melodic side of monotonic and would have given the proceedings an almost monastic/Gregorian feel if it were not for the interjection of a more spoken gothic tinted vocal dynamic between verses. Next up is "Peace On Earth" a song that lyrically scans like a love song but musically sounds like anything but, Hopper's deep growling bass combining with Brooks drums to lay down a thick layer of dank dark groove over which Hultgren and Vismara layer low tuned guitar textures and dank colourings drenched in distortion and barely held together fuzz, the songs lyrics telling us that "Blessed the meek shall inherit the earth" and that you should  "love your friends while they’re on this dirt". Deer Creek initially opt to go up-tempo sludgy and proto-ish for next song "The Utter Absence of Hope" with the band hitting into a dank circular type groove but then apply the brakes and slip into a dirge like refrain that if it got any lower and slower would come to a shuddering halt while for "It's Rotten" they go slightly alternative and grungy, albeit still quite doomy. "A Dark Heartless Machine" follows and is a doomic anti-war song set to a backdrop of grizzled low slung guitar and bass refrains underpinned by slow pounding percussion over which Vismara warns us to "hide the children down in the cellar", the song coming across like the bastard child of Black Sabbath's "War Pigs" in that it covers similar subject matter only viewed from a slightly different perspective. Finally we arrive at last song "The Working Man Is A Dead Pig" a blustering doomic tome that not only lifts the chorus from Bauhaus' "Bela Lugosi's Dead" but also validates our "War Pigs" analogy, for the preceding track, by actually lifting a verse from that iconic tome. 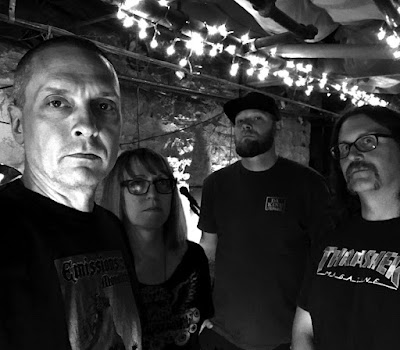 There is an edginess and slightly off-kilter feel to to Deer Creek's doom that sets the band apart from many of their peers and it is  something that cannot be easily translated into words, they are a band who utilize all the same tools as their stoner doom compadres , monolithic low slow heavy riffs and sedate pounding rhythms, but there is a something different in how they use those tools to create their music. This is doom folks but not quite as we know it.
Check it out ....
© 2022 Frazer Jones

Posted by Desert Psychlist at 20:46