MAMMOTH VOLUME ~ THE CURSED WHO PERFORM THE LAVAGOD RITES ...... review

"Stronger and weirder than ever, the godfathers of stoner prog return" is the legend that graces the Bandcamp page of Swedish groovemeisters Mammoth Volume, for their latest album "The Cursed Who Perform The Lavagod Rites" (Blues Funeral Recordings), whether Belgium's Hypnos 69 might have a stronger claim to that "godfathers of stoner prog" crown is debatable but then many might class them as more of a psych/prog outfit. Anyway, all this conjecture is leading us away from the fact that Mammoth Volume's new album is now out and whether you consider them "godfathers of stoner prog" or just a bunch of interested uncles there is no debating the quality of its grooves. 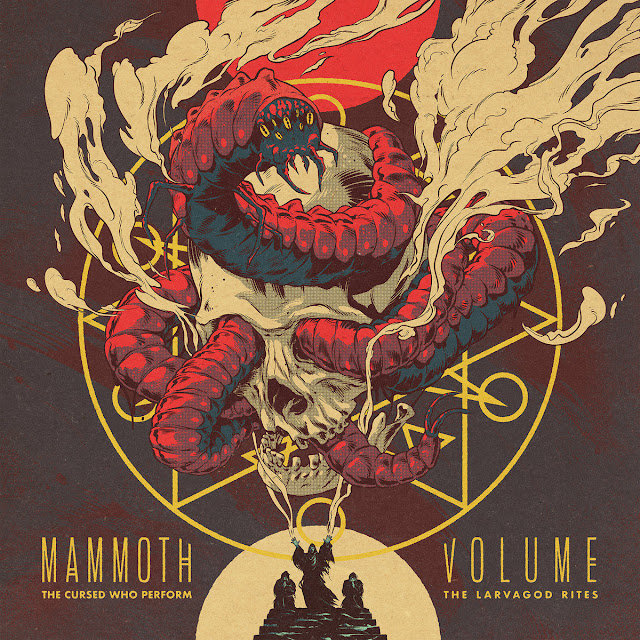 "The Kuleshov Effect" kicks things off and is the perfect example of Mammoth Volume's unique approach to their music, the song begins its journey with Daniel Gustafsson chopping out a lone guitar refrain accompanied by a dulcet toned vocal from frontman  Jörgen "Aston" Andersson before they are joined by Kalle Berlin's bass and Nicklas Andersson's drums in a crunching stoner-like groove that Gustafsson then decorates  with some quirky but effective keyboard textures J. Andersson pitching in with a more up front and stronger vocal backed and accompanied by guest vocalist Iza Elfström. "Diablo IV" follows and boasts a deep bass heavy chugging riff that Gustafsson again decorates with one of his quirky keyboard motifs giving the songs groove an almost fairground/carnival feel in its early stages. Note that we said "early stages" because the songs whole dynamic radically changes when Gustafsson swaps his keyboards for his guitar and things start to get a whole lot more intense and doomic with  J.Andersson's vocals shifting from a clean rock god howl to more of gritty roar in response. Next song "Medieval Torture Device" begins with the bass and guitar sharing an off-kilter refrain that is intentionally not quite played in tandem so as to give proceedings a funk(ish) otherworldly jazzy vibe, the song also boasts a great vocal from J.Andersson his clean powerful howls and throaty croons adding extra gravitas to the songs lyrical subject matter. The amusingly titled "Want To Join Us? Come Back Later" is a slice of funked up spaced out excellence full of unexpected twists and turns fronted by a heavily filtered vocal while its follow up "Osteoporos" is a laid back semi-acoustic song that's not sure if its a lament or a ballad and ends up a bit of both. "The Lightwedge 60's Race, Zombie Piccolo's and The German" is up next and starts off quite stoner-ish and straightforward but then takes a left turn into experimental waters as it nears its close and gets all highbrow and orchestral. "A King And A Tyrant" jams a strange mix of prog like rhythmic patterns and guitar textures, some of which wouldn't have sounded out of place on a 70's jazz fusion album, and also finds J, Andersson confessing " I threw my child into the wishing well"  in a laid back croon but then goes on to defend his actions by telling us he "nevertheless wished him well" Things get a bit more strident and direct for penultimate track "A Lullaby of Doom" and sees Gustafsson crunching out a heavily fuzzed guitar refrain around which J.Andersson asks us to "turn off your phones and float down stream", but it is not until around the halfway mark when, Berlin's bass sand N. Andersson's drums joins the fray,  that things get really heavy and we find the band sounding more like the "godfathers of stoner prog" that their Bandcamp liner notes professed they might be. Final song "Diablo V" is a mix of languid acoustic noodling, woodwind, synthesised effects, narration and off centre vocal harmonies, it is a pleasant but odd blend and one that is strangely hypnotic.

Another thing we could take issue with about that statement posted on the bands  Bandcamp page is the use of the word "weirder", there is nothing "weird" about what these Swedes bring to the table, quirky yes, off-kilter definitely but there is nothing that sticks out as radically "weird" . Ok the band do play around with form quite a bit and they do tend to cast their nets into waters other bands might not even consider dipping their toes into but that, in our opinion, does not make them a "weird" band it makes them BRAVE band and their new release "The Cursed Who Perform The Lavagod Rites" a truly courageous album.
Check it out ....
© 2022 Frazer Jones
Posted by Desert Psychlist at 11:09