When punk first exploded onto the music scene back in the mid 70's one of the reasons given for its emergence was that the youth of the day could find no relevance in songs about wizards, warlocks and dragons and wanted something that spoke to them about the lives they were leading and the problems that they faced on a day to day basis. Lately, however, it seems that reality has started to get a little too real for comfort for some music fans and they have once again started to look around for a bit of escapism, those themes, be it horror space or fantasy, that were once laughed at as being fey and trite are now once again becoming common place.
Lorekeeper, a two man groove unit from Minneapolis, Minnesota consisting of John Dowling (guitar/vocals) and Jacob Fulton (drums), do not try to disguise their love of a good fantasy lyric in fact they've filled a whole album with them, as you will find out for yourselves when taking their self-titled debut album "Lorekeeper" for a spin. "Tusk Rider", opens proceedings and is a graphic account of a hunt set in a time when wooly hided beasts and long toothed felines roamed the Earth, the song is written from the perspective of the hunter and tells of "hunting the mastodon, methodically tracking the herd" in grizzled vocal tones against a backdrop of crunching guitar chords and pounding percussion. "Obelisk Throne" follows and finds Dowling adopting a cleaner less abrasive vocal tone over a groove that has a slightly more doomic feel than its predecessor, There is Sabbath-ian feel to the  proto-metallish grooves of next track "Dragon Wagon", a feel that is reflected in its grooves but not so much within its vocals which are served up ear as catching and infectious. "Trilobyte" and "Crystal Nomad" follow in in quick succession, the former an ode to one of Earth's early inhabitants replete with stuttering guitar attack and industrious percussion, the latter a proto-doomic outing drenched in fuzz and distortion. For their next track, " Copper Colossus", Lorekeeper throw us a dark thrumming instrumental packed solid with multi-tracked guitar goodness and powerful drumming. The band bring things to a close with "Beyond The Shell" a superb heavy and  atmospheric tome that is built on crunching guitar refrains and solid busy drumming, its strident circling finale the perfect sign off on a very impressive album. 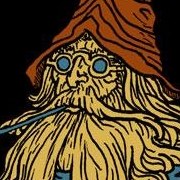 With tv/movie franchises like Game of Thrones and Witcher leading the way and fantasy themed concept albums appearing on the scene on an almost daily basis it seems that escapism is riding the crest of a wave right now so what better time to release an album steeped in the stuff. "Lorekeeper" is an album that ticks all right boxes, it sets scenes, it tells stories and it delivers musically so grab your club, don your loin cloths/robes or armour and let's join the band and go slay some beasties.
Check it out ......
© 2020 Frazer Jones
Posted by Desert Psychlist at 03:44