The three D's of trio Cosmic Marauder, Daniel (guitars/vocals); Daney (drums) and Dominik (bass), hail from another D,.Düsseldorf, Germany, and jam grooves that are unashamedly "stoner" in structure, in other words raucous riffs and thundering rhythms played hard, played heavy and played fuzzy. The band, made up of two old schoolfriends and a mutual acquaintance, only recently came together but have been rehearsing and practicing like madmen to hone their musical chops and with a few well received gigs under their respective belts the band decided it was time to put some grooves down on tape the result of which is the bands debut EP "Venus Ryder" 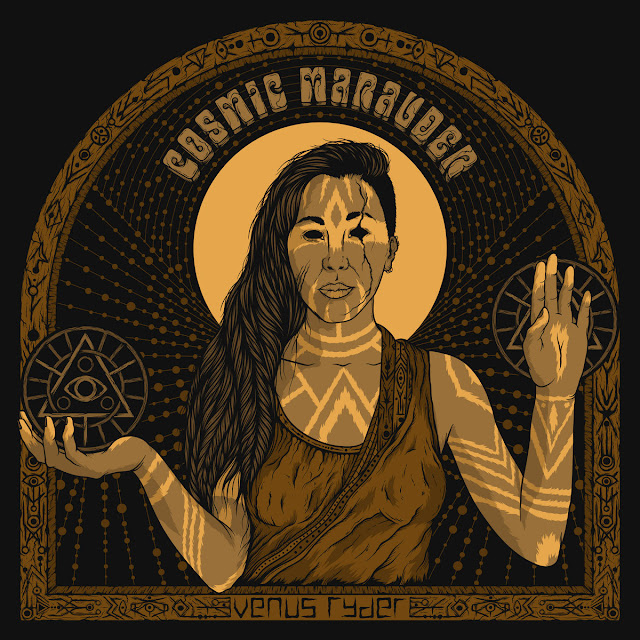 We at Desert Psychlist are very partial to a fuzz drenched grainy guitar riff and "Venus Ryder" is an EP absolutely packed with that particular commodity, however it is "Venus Ryder" the instrumental track that opens and lends its name to this EP that is probably the least grainy and the least fuzzy to be found here, its intro of strange noises and effects leading into a Floydian guitar motif that has sparse but effective single notes ringing out over liquid bass and restrained percussion, the songs laid back lysergic vibe only fractured when it sporadically erupts into crunching powerchords and thunderous rhythms. Those grainy guitar tones are given full rein on next song "Dynamite" a heavy stoner blues workout with a stop/start dynamic that is decorated in clean powerful vocal tones that sound at times like they are being sung through a loudhailer. "Green Ether" follows and finds the band still loitering in blues territory but this time surrounding themselves with a denser more doomic sound and levelling up the vocals with a more grizzled, harsher attack. The lysergic elements that informed the EP's title track are revisited again for instrumental "Too Close To The Sun" but are twinned with the more stoner doomic aspects explored on "Green Ether" resulting in a nice balance of the two. The band bring things to a close with "Cosmonaut" a furiously paced rocker with a strident desert feel, clean vocals roared with gritty passion over chugging palm muted guitar riffs, grizzled bass and solid industrious percussion. 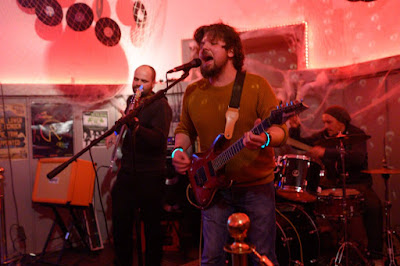 As debut EP's go "Venus Ryder" is up there with some of the best in its genre, but we at Desert Psychlist are guessing that this is a band who can and will do even better in the future. We predict that those snatches of lysergic experimentation, that sneak their way into the bands raucous doom tinted grooves, may well become a much more prominent part of the bands sound and if that is the case .....well watch out world!
Check 'em out ....

Posted by Desert Psychlist at 05:25