Australia, that land filled with everything that wants to  sting,bite, kick and eat you is also a land brimming over with untapped musical talent, talent that slowly but surely is, through sites like Bandcamp, ReverbNation, Spotify and the like, making its presence felt internationally especially in the underground rock scene. Comacozer, Dr Colossus, Motherslug and Holy Serpent are just a few of a vast array of new and exciting bands garnering attention outside of their native shores. One band who have been at the forefront of this antipodean influx since their inception are Sydney's Mother Mars, a trio consisting of Frank Attard (drums, percussion, Clavinet, synth), Paul Attard (guitar, bass, synth, banjo-mandolin, piano, organ) and Dave Schembri (vocals, harmonica, mellow vibes), who have been releasing a steady stream of well received albums and EP's since their formation back in the early 00's. After what seems to be a lengthy absence (from our ears anyway) the band are back with a new album "On Lunar Highlands" (releases December 06 on Pepper Shaker Records). 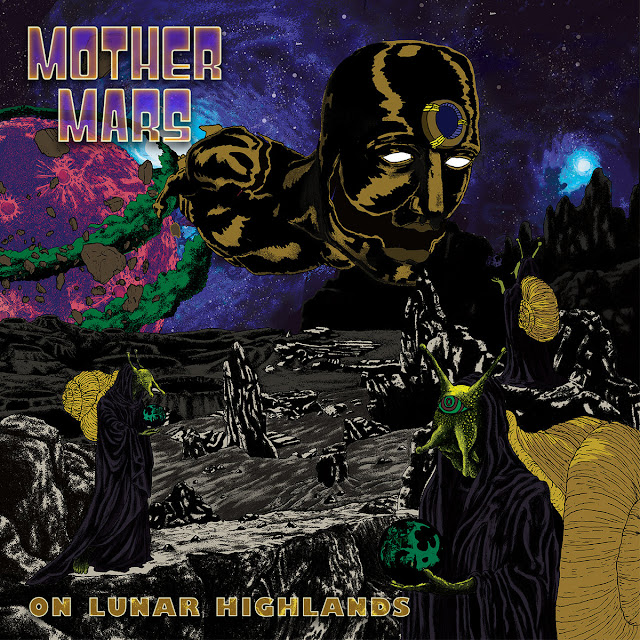 Those out there expecting the Kyuss/Dozer type stoner/desert grooves the band first brought to our ears with their debut "Take The Ride" or even the slightly heavier doom tinted space and psych that permeated their last full album "Steam Machine Museum" might be surprised by some of the directions taken on "On Lunar Highlands", though it would be fair to say there is plenty of both still to be found among the eleven songs on offer. Maturity is the word that first pops to mind while listening to Mother Mars new opus, if the bands earlier output could be visualised as a youth kicking against the rails and partying all week then "On Lunar Highlands" is that same youth finding his place in the world and only partying at weekends This more considered, mature approach combined with the bands increasingly impressive instrumental prowess and the bands willingness to occasionally throw away the rule book and step into unknown gives the songs on "On Lunar Highlands" an added level of depth an intensity that pays huge dividends right throughout the album and makes for a delightfully fulfilling and totally enjoyable listen.
Check it out ....