Fuzz Evil, Wayne Rudell (vocals/guitar), Joseph Rudell (vocals/bass) and Marlin Tuttle (drums),  a three piece band of riff obsessed stonernauts from Sierra Vista, Arizona have been teasing us with little snippets of groove since their formation, a split 7" single Fuzz Evil/Chiefs was released in 2014 and in 2015 "Born Of Iron", a free to download single track, was released on Bandcamp, both releases showcased a band heavily influenced by late 60's, early 70's hard rock but also a band intent on fusing those influences into a more modern stoner/ desert rock, 00's setting.

This year (2016) the band have released their first full length album "Fuzz Evil" via Bandcamp and Battleground Records. 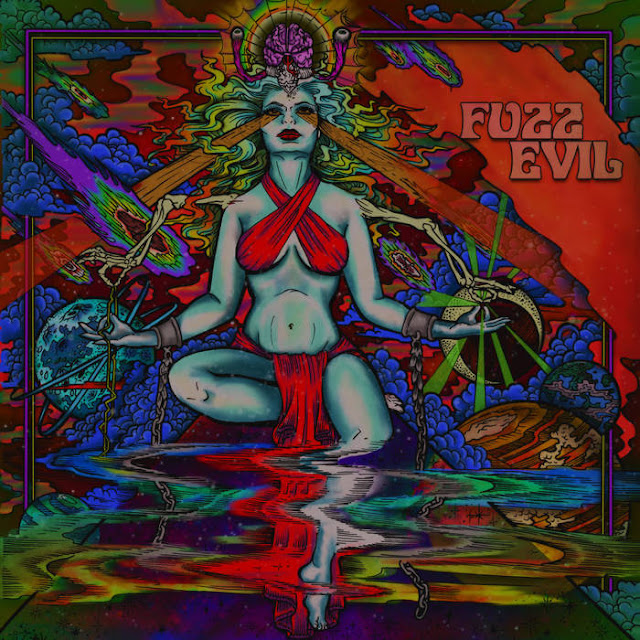 "Fuzz Evil" is a hot steaming gumbo of warm fuzz and hard driving rhythms coated with clear, clean and soulful vocal tones and a truckload of sandy desert groove. Like a football/soccer match "Fuzz Evil" is a game of two halves with the first half being a riff  heavy desert road trip with songs like "Good Medicine", "My Fuzz" and "Killing The Sun" all drenched in Kyuss/Unida- like desert fuzz and sandy rhythmic patterns. The second half of the album sees the band looking over the dunes and staring at the stars with elements of psychedelic experimentation and moody lysergic induced introspection creeping into the grooves. "Bring Them Through" jams an almost commercial groove, a groove reinforced by it's sing-along chorus and vocal melodies that although surrounded by a hard driving stoner riffage has a touch of 60's legends The Turtles about it. "Odin Has Fallen" hits an altogether more hard rock groove and is built around a chugging guitar refrain underpinned by big bass lines and pounding percussion over which powerful clean vocals are laid. The song takes off into the stratosphere in the last quarter with Wayne Ruddell laying down a scorching solo over Joseph Rudell and Marlin Tuttles' huge wall of rhythm. "Black Dread" sees Fuzz Evil going full out on an acid rock workout that sees the band throwing into their sandy grooves elements of Earthless/Wo Fat type psychedelic guitar colouring and structure that is further enhanced by the addition of keyboards (superbly played by the bands sound engineer Brian Gold). Moody, bluesy with the keyboards adding a touch of Deep Purple-ish funkiness to the proceedings it is a fitting end to a truly spectacular debut from a truly impressive band.
Check it out....

Posted by Desert Psychlist at 05:05