Something of a "supergroup" The Freeks are the brainchild of Ruben Romano (founding member of both Fu Manchu and Nebula). The Freeks first raised their heads into the light back in 2007 when Romano called in favours from such musical luminaries as Jack Endino, Scott Reeder (Kyuss), John McBain (Monster Magnet), Isaiah Mitchell (Earthless), Lorenzo Woodrose (Baby Woodrose) and the legendary Bernie Worell (Parliament, Funkadelic) to create The Freeks first self-titled album. Three years later Romano once again raised The Freeks banner this time calling on help from Bob Lee on drums (Claw Hammer, Backbiter), Tom Davies on bass (Nebula),  Esteban Chavez on keys, and Jonathan Hall on guitar (Angry Samoans, Backbiter) With Romano front and centre, supplying guitar and vocals, the band recorded "Full On"  a storming set of garage and stoner grooves that recalled the fire and passion of Detroit's MC5 and  The Stooges and mixed it with the stoner punk of Romano's former bands Nebula and Fu Manchu.
It's now 2016 and Romano has once again raised The Freeks flag, managing to pull together the same guys who made "Full On", the band are just about to release a new album "Shattered" on Heavy Psych Sounds Records. 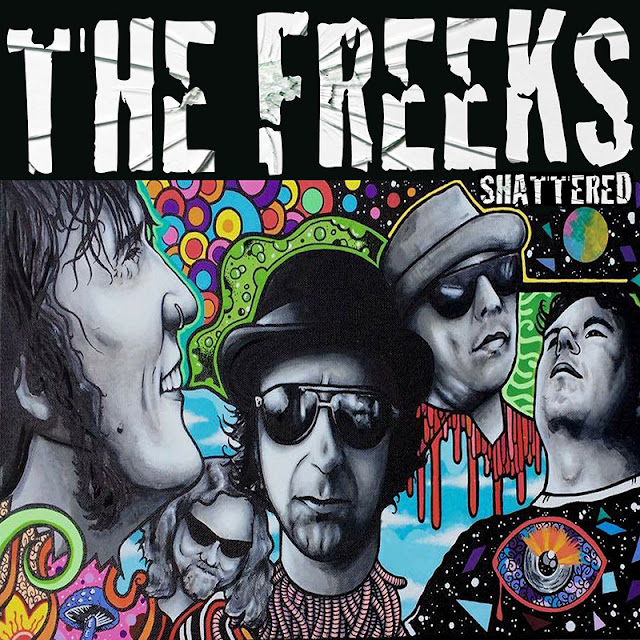 "Tiny Pieces" kicks things off, its fiery garage riff  and punk sneered vocals recalling a time before the posturing pantomime menace of Guns'n'Roses, a time when rock was actually dangerous and it is that feeling of danger that permeates throughout the albums thirteen tracks. Like second album "Full On", "Shattered"  take its lead from the raw edged garage rock of the late 60's but blends into those grooves elements of 80's stoner and 00's psych and rounds them off with late 70's punk attitude and attack. Romano's vocals shift from punk-ish scream/shout to throaty stoner roar, tailoring his delivery to the grooves being played around him. Romano also combines with Hall to lay down swathes of vintage fuzzed riffage and solo's over a pulverising backdrop of rhythm, superbly provided by Lee and Davis, with Chavez adding extra substance with his excellent keyboard incursions. MC5 and The Stooges influences abound through many of the songs on "Shattered" especially on tracks like "Strange Mind" and " I'm A Mess"  but touches of New York Dolls tongue in cheek arrogance ("Irvana") and Dictators-like rock-punk melody (" Fast Forward") can also be found nestling away here too.
The best compliment you could give "Shattered" is that it is an album that could as easily live in those heady days of the late 60's as it can in the  heavy stoner underground of today.
Now  "Kick out the Jams Motherf^*kers!" and go and check it out......

Posted by Desert Psychlist at 12:42