THE BYGONE FEW ~ Self Titled Album....review

Blues revivals have come and gone over the years, a while ago it was the two man crews of The White Stripes and Black Flag carrying the flag at their masts then , like in days of yore, the Vikings invaded with bands like Sweden's Graveyard and Kamchatka as well as Norway's Lonely Kamel cutting a swathe through the dross on their journey to Robert Johnson's legendary crossroads adding a little stoner/hard rock edgeiness to the devil's favourite music . These days though it seems that it is the shield maidens of both Europe and the USA who are holding the rudder when it comes to steering the good ship blues. Holy Grove, The Blues Pills and Ruby The Hatchet have all, to certain degrees, taken the blueprint written by the delta masters and twisted, turned and moulded those minor pentatonic grooves into something quite familiar but excitingly new, adding elements of stoner, psych, occult and even doom and delivering them via strong female vocals.
To this growing list of blues influenced bands fronted by female voices I would now like to add the name The Bygone Few!
The Bygone Few are from Rochester,New York and are made up of Alicia Hurley - Vocals
Ryan Hurley - Guitar & Backing Vocals, Brian Goeltz - Guitar, Alex Bellanca - Bass and Michael Bellanca - Drums and deal in gritty blues based stoner/hard rock shot through with heady elements of psychedelic finesse and even a little pop/punk aggression as can be heard on the bands self titled debut..... 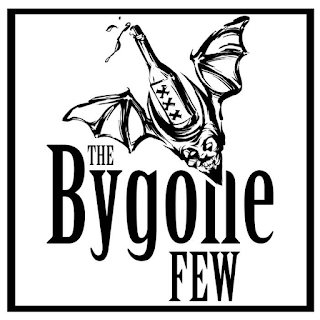 "Beg" kicks off the album with Zeppelin-esque majesty, the band jamming on a "When The Levee Breaks" type riff beneath which M. Bellanca pounds the skins like he has been possessed by the ghost of one John Bonham. The song builds layer by layer ramping up the atmosphere with the guitars of R. Hurley and Goeltz slipping and sliding against each other while A. Bellanca keeps the bottom end low and nasty his bass locking in tight with M, Bellanca's insistent rhythmic pulses. Alone this would put a big cheesy smile on the face of any fan of good bluesy stoner rock but the icing on this cake has yet to arrive. Alicia Hurley's voice explodes out of the speakers soaked in echo and with the sort of feral power that sends shivers up the spines of grown men. Her voice, an instrument in its own right, is a little less Joplin-esque than Holy Grove's Andrea Vidal possessing a deeper, bassier tone more akin to Beth Hart, it's a voice she uses like a weapon stabbing out the lyrics with emotive strength and raw energy taking no prisoners on her way. The song ends with everyone going hell for leather, a maelstrom of voice and noise and when the final note fades into silence the listener is left feeling drained but totally elated.
"DuTchess" begins with stroll down the path of country blues, two acoustic guitars playing off one another, one laying down the groove while the other slides and slurs over the top then BANG! the powers been turned on and we are electric again. The band hit into a  groove that Jimmy Page would be proud of, a rolling blues riff enhanced with smokin' guitar solos, solid rhythm work and of course those wonderful vocals.
"Face To Face" throws the listener a curveball, instead of the blues of the previous two tracks what we get instead is an up-tempo punk/pop workout that owes more to the dirt strewn floors of CBGB's than the plush carpets of the Royal Albert Hall. A. Hurley channels her inner Debbie Harry in a track that sees the bands strip their sound down to achieve a 70's New York vibe that is more Ramones than it is Robert Cray. It's my least favourite track of the album but does show that this band have more than one string to their bow.
"Alcohol and Mistakes" is back in blues territory albeit with slightly more stoner edge. A lone guitar rocks out a fuzz drenched circular motif before the rest of the band join in creating an infectious and totally addictive groove. A. Hurley keeps her vocal low and smokey evoking a feeling of moody malevolence and regret,... that is until  the 2:53 mark when the song segues into more of an up-tempo stoner blues shuffle that takes the song to its conclusion.
"Kill You Slow" finds the band leaning more towards the hard rock side of their sound. The band groove around the main riff with R, Hurley And Goeltz trading riffs, licks and solo's over, in and around the huge rhythmic pulses being created by the two Bellanca's beneath them, A Hurley again keeps it low and smouldering only raising the temperature when her husband joins her on the catchy chorus yet even on the lower key verses you can sense this woman has another gear she can find if she so chooses.
"Undertow" stays in the hard rock arena but those blues are never far away and when the song goes into its mid section they re appear in the form of smouldering guitar solo's and powerhouse vocal displays underpinned with some intense drumming and rumbling liquid bass.
"Arrogant" is for this listener the best track on what is an album full of good tracks. It's stuttering riff rolls along nicely with the band all hitting into a cool mid -paced groove until when, just over the half way mark, the dynamic drops down. A, Hurley repeats the refrain "I keep my arrogance" over and over, at first low and smokey and then, as the music around her builds, she slowly ramps it up until she truly let's rip in a stunning display of power and control that is matched by the rest of the guys around her. Guitars swoop and swirl, drums and bass crash and thunder taking the tune to a thunderous and thoroughly enjoyable crescendo.
"Sin" closes the album with a mix of stoner grittiness married to the NY punk influence hinted at on "Face To Face" yet still manages to shoehorn in those blues vibes that are such an integral part of the bands sound. The singer roars "You fucked up my heart so I broke your face" with conviction and passionate anger while the rest of the band back up this aggression and angst with a wall of fuzz drenched noise peppered with smouldering guitar solos, riffs and driven by infectious head nodding rhythms.

If, like me, you still think the blues has something to say in this day and age but your a little tired of hearing the same old clichés time and time again then check out The Bygone Few you might just find where you left your mojo!

Posted by Desert Psychlist at 13:57